Success With Hyperlinking Is Stepping Back From The Ledge

Share All sharing options for: Success With Hyperlinking Is Stepping Back From The Ledge

The much-feared conference armageddon may be mostly averted for now due to the Pac-12 deciding to stay put. However, the situation remains... fluid.
Not exactly a story book ending. Once the heir apparent at mighty Texas, Garrett Gilbert has had an almost meteoric fall from grace. He'll need season ending shoulder surgery, which combined with his lackluster performances will nearly ensure that he won't see the field in Austin again.
For real, guys? Remember how the Fiesta Bowl got caught laundering political contributions? Turns out the Sugar Bowl was doing the same thing.
Buckeye sleeper cell, I'm sure. Dennis Talbott was told to stay away from the Ohio State program after it was rumored that he gave Terrelle Pryor thousands of dollars in exchange for autographing various items. In his new found spare time, he's passed the time by... getting credentialed as a photographer at Michigan games under a fake name?
Should've saved some money and just called them HATERZ on the internet. An interesting new billboard just went up in Waco, not far from Baylor campus. Very mature, everyone. 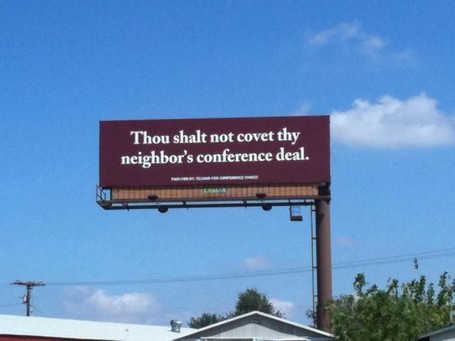