Lost in the hyperbolic squawking of realignment is the fact that we're just getting into the meat of football season. Remember football? It's awesome and great and the best sport ever, and there's lots of it on starting tonight! There are four games between ranked opponents this weekend, and all of them should be competitive and entertaining. So come along, friend, and let's take a look this weekend's best offerings.

All game times are Eastern time because that's the way God intended. You may consult the TV schedule here.

Irresistible Force meets Immovable Object, all while surrounded by thousands of barking mad lunatics who've drank enough bourbon to make a man more wolf than human. The big question is whether WVU's high powered offense will be able to put up points on LSU's killing machine of a defense. I'm skeptical, but this game should be close because WVU's defense is far from a pushover.

Another matchup between a high flying offense and an oppressive defense. Arkansas let this game slip through their fingers last year at home, so they've had this Saturday circled on their calendar for a long time. Alabama's defense should be able to contain Arkansas' already hampered running game, but the question remains whether the Tide can slow down the Hogs' passing game. I think Arkansas has a good shot of coming into Tuscaloosa and winning this.

Defense optional in this one. The Big 12 is pretty much a three team race (Sorry Baylor), between these two teams and Oklahoma. The loser of this game is more than likely out of contention for a BCS birth if the rest of the season goes according to chalk. This game last year was a thriller, so you should probably tune in for it.

Florida State is extremely banged up, and will likely be without starting QB EJ Manuel and four of their top five wide receivers. Clemson is, well, Clemson. If you're betting this game, you must really hate money.

I personally guarantee that this game will go to overtime. There is absolutely no way it won't. Here's how it's gonna happen: ASU will jump out to an early lead, and USC will catch up by trying to go for two several times, not convert any of them, then tie the game on a last second field goal. USC will then fumble on the first play of overtime. 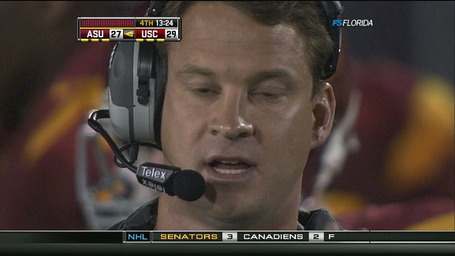 As always, the Kiffin DERP factor for this game is: Moderate to high.

Will the Ramblin' Wreck run for over 600 yards again? No. Will Paul Johnson be pissed about it? Yes. GT should still be able to move the ball, but North Carolina are far from pushovers on defense. It remains to be seen whether the Heels can score enough to win this game, but last time I checked, it wasn't like the Yellow Jackets were the '85 Bears.

Try to watch this game and not spew obscenities at both teams. C'mon, give it a try!

Will we finally see a coach fired on the sidelines? If either one of these teams gets blown out, we just might! /crosses all 20 fingers and toes