As of this Monday, the NCAA has sent South Carolina a notice of allegations regarding athletes who received $55,000 worth of impermissible benefits and recruiting inducements. This also includes involvement with a Delaware-based mentoring organization known as SAM, or The Student Athlete Mentor Foundation.

Per their mission statement, SAM provides "supplementary support to high school student-athletes in both their academic and athletic endeavors" and has branches in almost every major area of East coast high school football. Getting prospective college football players in 7-on-7 competitions and helping them make unofficial recruiting visits to campus are included in that service.

Two weeks ago, former Penn State recruit, now Florida DT Sharrif Floyd and South Carolina wideout Damiere Byrd were suspended for 2 and 4 games respectively. These suspensions came in the wake of further allegations of recruiting incentives, and benefits paid for by the SAM program, interestingly enough after Byrd's father was promoted to Vice-President of the program. 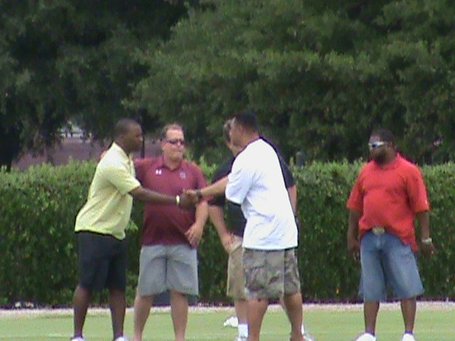 "Yes, we helped Sharrif, so I guess that’s what it’s about," Gordon said today. "It’s with regard to my foundation's support of Sharrif when he was in high school. That’s what I’ve been led to believe."

WIth South Carolina headed towards the NCAA rulebook, radio stations across the Carolina's have talked extensively this week about Penn State's success in the Mid-Atlantic region. Mainly, the number of players who have come through the SAM program and headed to Penn State. Rumors have gone so far as to suggest that South Carolina will attempt to bring Penn State's success in the region and relationship with the SAM program into the spotlight.

While Penn State's ability to recruit in that area has been well documented, it's somewhat of an expected result as Penn State is one of the more appealing football programs in the North East region. To suggest that a pipeline has been made between the SAM program and Penn State, would have to be done without evidence. At this point, radio stations are just trying to create controversy, which they have.

That does not mean, however, that Penn State didn't dodge a bullet. 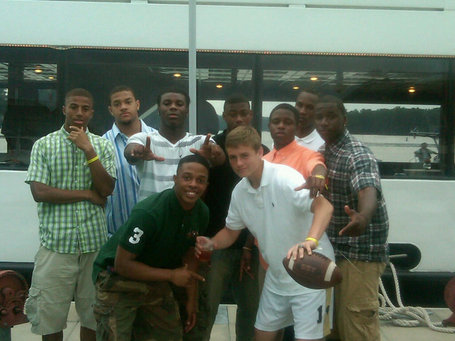 Pictured above in the black shirt is now Penn State true freshman cornerback Adrian Amos, one of the more anticipated freshman on Penn State's roster. His impressive interception in garbage time against Indiana State only helped his cause. Standing next to Amos is holding up a makeshift Miami U is Deontay McManus, a high school wideout who not only worked out at Penn State, but was the feature of an Outside The Lines show on 7-on-7s. This picture was taken before boarding the Spirit of Lake Murray by Amos' younger brother.

The SAM Foundation brought 49 football players to South Carolina’s campus for a 7-on-7 tournament in June of 2010, Gordon said. As part of that trip, SAM treasurer Kevin Lahn paid for a dinner boat cruise on Lake Murray at a cost of $3,350, the NCAA determined.

Adrian Amos wasn't the only future Penn Stater around. Deion Barnes, who at the time was still being recruited by South Carolina was also at the camp. While there isn't any evidence that Amos or Barnes took part in any wrong-doing in the NCAA's eyes, it isn't unreasonable to think that the opportunity may have arose.

Interestingly enough, after their visit to South Carolina, both Amos and Barnes heard little from the Gamecocks and both eventually found their way to Penn State, long after these incidents had occurred. Even so, Sports By Brooks picked it up, and the trip mentioned above was talked about in some depth.

For Penn State, there is really little worry. If anything were to come of this, it would be in the form of some individual suspensions but as a program Penn State is clean. Any mention of a SAM to PSU pipeline is purely speculation and at this juncture should be treated as such.

If anything, it's a good reminder how easy it can be to find yourself in a tight spot in a matter of days. This article was put together to highlight something that could have gotten ugly in one way or another for Penn State. It's a good reminder that for as clean as Penn State has been over the years, even the best programs are a simple misstep or wild booster from being short a few players. 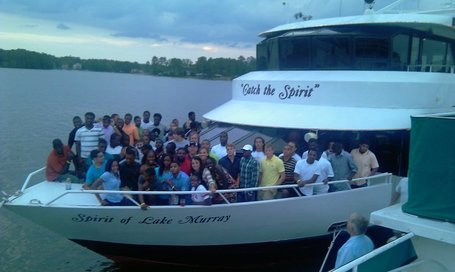