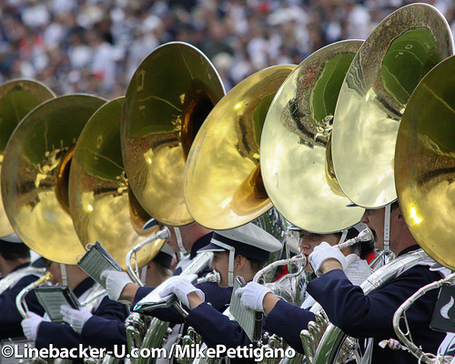 We thought it would be nice to combine our week-in-review posts with a Saturday morning open thread. It was our first full game week as the new guys here at BSD. Man, was it wild. I can't even imagine what it's going to be like next week. But this was a great first run. We had 30! front page posts this week. So if you missed any, they're all right here. And if you did read them, feel free to discuss whatever is on your mind this gameday morning!

As always don't forget to vote in the poll. This week is, well, you'll see...

*Just a heads up, I forgot to make these links auto open in a new tab/window. So you might want to right-click them and open them manually in new tabs/windows.

Improvement in 2011? Automatic For The People. - by Chris

Returning Starters vs Win Percentage: Going Back 40 Years to Predict 2011 - by Mike

Big Ten Week One Lines: Bring Your Abacus, The Illiterate Gambler's Standings Are Out - by Kevin

Success With Hyperlinking Says The Show Must Go On - by Kyle

The Indiana State Sycamores and You: An Objective Preview - by Jeff

Success With Hyperlinking: Subpoena-Free Since Forever! - by Peter

FOOTBALL AT LAST: A National Week One Preview - Peter

Success with Hyperlinking is Stepping Back in Time - by Kyle

Your Week One Totally Serious Football Odds - by Tim

Snacks On Snacks: Liquid Sustenance of the Craft Can Variety - by Chris

L247: Rob Bolden to Start vs Indiana State - by Mike