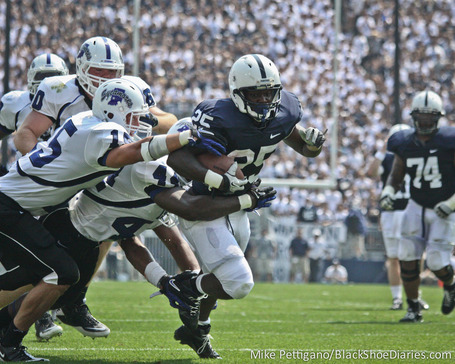 The storyline headed into the 125th year of Penn State football was supposed to be dominated by a quarterback controversy that has spanned over two seasons. Instead, Silas Redd, the talented sophomore running back out of Norwalk, Connecticut put together a series of highlight film runs on his way to a 12-carry, two-touchdown, 104-yard rushing day and a 41-7 Nittany Lion victory.

Redd wasn't the only back moving the offense though, Curtis Dukes, Brandon Beachum, and Joe Suhey put together a solid days work as well racking up 117 yards on 19 carries. The army of running backs made up for a average showing by Matt McGloin and Rob Bolden, amassing 245 yards on the ground and five touchdowns. While the starting quarterback controversy will be discussed throughout the remainder of the season, it was evident today that in the 125th year of Penn State football, Joe Paterno may go back to his roots: an athletic, physical running game leading the offense.

For Matt McGloin and Rob Bolden, it was a different story. Throwing a combined 12-of-20 for 114 yards, neither quarterback seemed to truly have an edge in the competition. While McGloin led the Nittany Lions on three scoring drives, Bolden arguably could have done the same if not for some bad drops by his receivers. With both quarterbacks coming in and out of the game, it was difficult for either quarterback to establish a rhythm. Even so, neither Bolden or McGloin were truly impressive. This was a feeling coach Joe Paterno echoed in the post-game press conference expressing that it wouldn't be surprising to see both quarterbacks take the field against Alabama.

On the defensive side of the ball, Penn State was anchored by strong play on the defensive line and exceptional play by the Nittany Lions secondary. Captain Drew Astorino had an interception and several solid defensive plays that helped the Penn State defense allow only 170 yards of total offense. On the whole, Penn State's defense took a step forward since the last time Nittany Lion fans had seen them play, and it looks as though Tom Bradley once again has a solid, and deep unit to work with.

The dominant victory wasn't without it's troubles, as Penn State struggled in the kicking game without the presence of suspended kicker Anthony Fera. Evan Lewis was 0/2 on field goals and missed an extra point. With shallow kickoffs and shaky field goal kicking, the return of Anthony Fera cannot come soon enough for Penn State fans.

Overall, a 41-7 victory was a good way for Penn State to kick off their 125th season. With an afternoon meeting against Alabama only 7 short days away, Penn State has plenty of positives to take into an important week of practice.