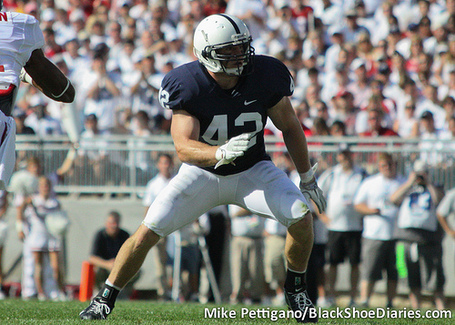 Well crap. This is one post I really didn't want to write this week because of what happened last week. Can I simply put up a "Nothing To See Here, Folks...Move Along" sign and pretend that a couple of gruesome injuries didn't happen last week? No? Well, I guess we'll have to cover them then. First the official injuries:

LB Mike Mauti (knee) - Out. [sadface] Mauti now puts on his coaching shoes ($) ala Sean Lee from a few years ago and watches from the sideline for the rest of the year. With one more year of eligibility remaining (as well as the chance to petition for a sixth, the success of which remains in doubt), Mauti can concentrate on coming back from a second ACL injury. His absence means Nate Stupar is back in the starting lineup. If he plays like he did against Eastern Michigan, we'll be OK. One to watch is Khairi Fortt; he has arguably performed better than Glenn Carson in the middle, but he was also recruited on the outside. With Mauti's injury, Fortt may move back out.

CB D'Anton Lynn (neck) - Doubtful. I will respectfully disagree with Mike's assessment from this morning, and posit that Lynn's absence means Adrian Amos moves into the 1a/1b rotation with Stephon Morris at the corner spot opposite Chaz Powell. Fitz feels that we could also see an increased role for Malcolm Willis in this shakeup, though Lynn shouldn't be out for too long, so it remains to be seen how this will play out in coming weeks.

T Mike Farrell (knee) - Possible. Farrell is on his way back from a knee injury suffered earlier in the year, but like last week, rushing him back isn't necessary as our opponent shouldn't pose much of a threat.

RB Brandon Beachum (foot) - Possible. See Mike Farrell discussion. We could put Joe at tailback this week and run a 31-dive all game long and still come away with over 150 yards rushing. Whether or not Beachum plays is a moo point with Redd and Dukes running well (when the line cooperates). I don't expect him to see much time, if at all.

WR Curtis Drake (leg) - Drake saw action last week and actually touched the ball for the first time in what seemed like 7 years. As he continues to get healthier, his presence allows us to use a slot receiver in more effective ways. Clearly the short crossing route to Devon Smith works, but his successful play resume is pretty short.

Luckily, that's pretty much it on the unofficial injury front. Just a couple of other quick notes though. When Penn State traveled to Philadelphia two weeks ago to take on Temple, I let you know all of the current players that would be playing near their hometowns. This week, only two players on the current roster will be heading home, as kickers Sam Ficken and Alex Butterworth each hail from Pawnee Indiana.

Finally, Will Mahone told me this morning that he will be announcing his college choice after his game tonight against Massillon-Jackson. This race is down to Notre Dame and Pitt, after Penn State was dropped by Mahone following a disappointing visit (and apparently a cooling by the staff, which makes sense, given Mahone's talent and our need for a star running back in this class). My money is on Notre Dame, but two of Mahone's good friends and teammates recently committed to Pitt, so neither would surprise me.