Jack Crawford Looking For A Shot At Redemption

Share All sharing options for: Jack Crawford Looking For A Shot At Redemption 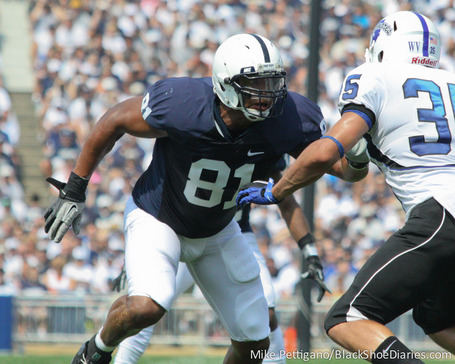 Coming into the the already packed media room made Jack Crawford looked even more menacing than usual. His 6-foot-5, 273-pound frame filled up his interview booth as reporters and cameramen swarmed in for a quote from the London native. Despite his outward appearance, Crawford is one of the nicest players on the team, a quiet person who is surprisingly open and introspective for a player that has had such hype around him.

For Crawford, this Saturday's game wasn't just an opener to his senior season, but a shot at redemption. After his year was cut short last season when he suffered an injury that required surgery to repair ligament damage in his right foot, all Crawford could think about was getting back on the field.

"To get my hands on the quarterback again, it just feels good," Crawford said. His two tackles for a loss and a sack made his first game back from injury one of the bright spots on a day when the entire defense played very well. "For me being able to get off the ball is everything, I feel great right now."

Heading into his senior season Crawford feels that he still has something to prove. The once hyped defensive end gave Nittany Lion fans high hopes that Crawford would fill the shoes of other stellar defensive ends to have come through Happy Valley. While Crawford has been a solid player on the outside, he hasn't quite lived up to expectations that were admittedly not his own doing.

Crawford sensed the defense played with more passion, more energy in the season opener. The 2010 Penn State defense wasn't able to live up to its distinguished and feared predecessors, but Crawford said he and all the defensive players know that it's time to move onward, and upward, in 2011.

"Looking back at last year and how we opened the season we definitely look stronger," Crawford said, alluding to the slow starts that plagued the Nittany Lions throughout the 2010 campaign. "We really ratcheted up the intensity and I think it shows."

For Penn State, the intensity will need to be taken to an entirely different level next week, when a talented and athletic Alabama team takes the field in Beaver Stadium. The defense knows it played well Saturday, but with no offense to the Sycamores, Indiana State is hardly the national-title-or-bust Crimson Tide.

Smiling once again, Crawford said he knows it'll take a great effort to beat Alabama, but "I had fun out there today, I hope to have fun again next week."