Share All sharing options for: Recap, PSU 41 - ISU 7: Mark Of The Unnamed 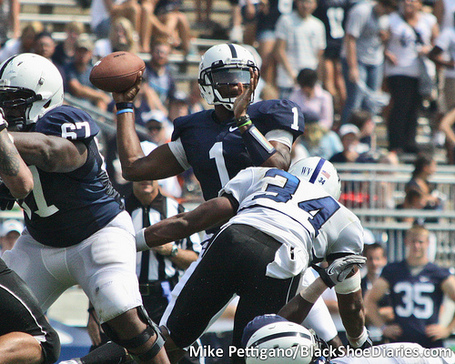 Even for a season-opening cupcake game, it's hard to find much about the Indiana State game that was unexpected.  The opponent had intense difficulty moving the ball (170 total yards, 8 first downs), and Penn State ran the ball with ease against an undersized FCS defense.
Drive chart:

Animated Drive Chart brought to you by Gameday Depot.

The story remains the quarterback derby, so we'll take a closer look at every throw made by Matt McGloin and Rob Bolden below.  First, a few quick points.

Pass Protection.  Where was it?  Ben Obaseki is a very good player at the FCS level.  He should not be blowing up DeOnt'Ae Pannell, a 310-pound senior guard, with a standard bull rush.  The blitz pickups by Penn State's running backs, as a whole, could most charitably be described as "reluctant".  Rob Bolden was hit while throwing on several occasions.  I will take this opportunity to remind you that the opponent was Indiana State.  Next week is Alabama.  I suspect that their front seven will be a slight upgrade from the Sycamores.

Forgiving Fera.  This is not an all-out assault on Evan Lewis and Sam Ficken.  Lewis made a 33-yard field goal that was whistled down when Johnnie Troutman jumped early, leading to a missed 38-yard attempt.  Lewis also showed surprising leg strength on a missed 47-yard attempt later in the game.  However, the kickoffs were often embarrassingly shallow.  A team starting at its own 40 scores 2.14 points on average per possession.  Starting from its own 20, that number shrinks to 1.55 points per possession.  Seems minimal, but these things add up, not to mention the higher chance that an opposing punt after one or two first downs pins your offense in its own end.  This is a long way of saying that Penn State really needs Anthony Fera.  We'll see how serious Joe Paterno is about this disciplinary case.  The Stephfon Green matter wasn't exactly a prolonged display of power.

The Dropsies.  The wide receivers are supposed to be a strength -- the strength -- of the Penn State offense.  They had opportunities to make big plays on Saturday and couldn't haul in extremely catchable passes.

Defense?  Whatever.  They were good.  They should have been.

As for the quarterbacks...

Your standard PSU play-action roll-out dump to the fullback. You've seen it in your sleep.

Should have been caught? Perhaps -- the ISU cornerback made a nice play at the last second, tugging down on Moye's right arm just as the ball arrived. 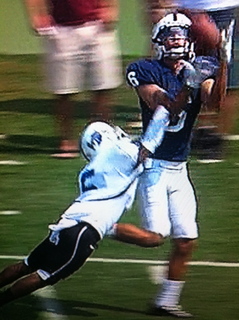 Still, a beautifully thrown ball by Bolden which traveled 50 yards in the air.

Led to 4th and 1. Szczerba rounded off his out pattern almost immediately and caught the ball a yard short of the first down marker. He was looking for Bolden to throw the ball a bit sooner, but it's hard to tell who gaffed on this play (if anyone).

Sort of doomed from the start.  Bolden locked onto a Moye post-corner and threw it into double coverage.  It was a bad play, too -- there weren't many viable receiving options, and none on Moye's side of the field. 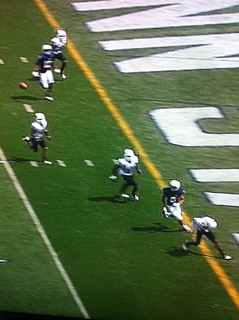 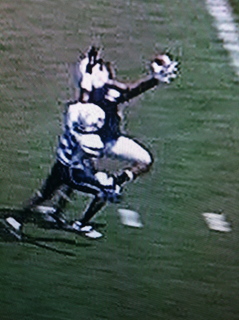 Bolden was hit on this throw (why exactly was any quarterback getting hit against Indiana State, again?) but stood tall and delivered an excellent pass to Justin Brown. Minor gripe: there was a much easier throw to be made to the tight end, which could've gone to at least the 10 yard line, if not a touchdown.

Simple pitch and catch on a short out pattern.  Perfect throw, but not a hard one.

Correct read, good throw past the outstretched hand of a diving ISU linebacker.

This was the near-disaster on an attempted screen to Beachum, who was on the ground as McGloin was being taken down by Ben Obaseki.  Obaseki had gloriously blown up DeOnt'Ae Pannell before grabbing McGloin's ankle.  Inexplicably, instead of just taking the sack for a 2nd and 20 with a 28-0 lead, McGloin threw the ball directly to ISU linebacker Phil Walker.

ANOTHER screen, this one thrown over Beachum's head.

Included only because it's the last play of the half.  McGloin hands off to Suhey and turns his back on the play and walks toward the locker room as soon as Suhey makes first contact with a tackler.

This seems flippant and stupid.

Thrown a little behind Moye and over the head of a linebacker who had his back to Bolden.

SLIDE, Rob.   You're three feet from the sideline, don't be a hero.

Bolden stands tall while taking another hit, this one thanks to a laughable attempt at a blitz pick-up by Silas Redd.  The throw is still pretty good, all things considered, but glances off Kersey's fingertips.

Corner blitz, and McGloin quickly gets it out to Moye.  Could've been a touchdown with a perfect throw, I suppose, but it's inside the 1 yard line.

Bolden finally gets a chance to dink and dunk.  These are both on the money.

Underthrown to the fullback in the flat.  One of Bolden's worst passes all day.

This is supposed to be a screen to Dukes, but it's blown up by a safety blitz.  Bolden tries to do the smart thing by "unintentionally" grounding the ball, but he throws it at the feet of left tackle Quinn Barham instead of Dukes, who had leaked out to the right side.  Given that the rest of the linemen released to the left side, to me, this is rather clearly Dukes' screw up.

Should be a six yard gain, but BMF juggles it on his way out of bounds.

This is a three-man rush, and Quinn Barham gets beaten badly by a Ben Obaseki spin move.  Bolden hit as he throws, again.

I agree with the sentiment that if Moye and Brown haul in those first quarter bombs for touchdowns, we're not having this conversation.  Same goes for if the Sycamore linebacker runs in McGloin's super-derp on the aborted screen play.

McGloin looks like the same quarterback as last year.  He's perfectly capable of piecing together drives with simple, timely throws.  This is not an insult.  However, that near pick-six should be a giant red flag to the coaching staff.  Ridiculous by any standard.  McGloin's continued playing time should absolutely be attached to the notion that he doesn't do anything egregiously careless with the football.  He's a constant man-on-a-wire routine. 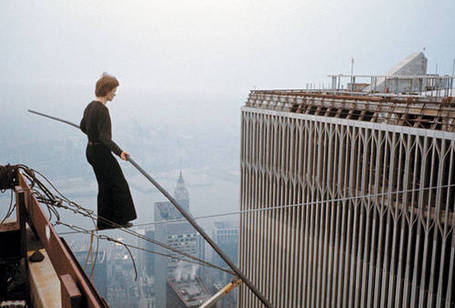 Bolden does tend to lock onto his primary receivers, though I'm not sure that this offensive line is going to be good enough to let him get to options two, three, or four on a regular basis against a serious defense.  To that end, it doesn't really matter which quarterback plays.  Both will likely be needed at various intervals, especially if Bolden isn't taught a simple hook slide sometime between now and Saturday afternoon.

Penn State's defense looked very good against an offense we all knew would be very bad.  Field goals and kickoffs remain a mystery with Fera's absence (punter Alex Butterworth was okay, although one punt was partially blocked).  It's one game.  The level of play obviously goes up exponentially next week.  The coaching staff tried a number of combinations on the offensive line in hopes of rolling a Yahtzee.  From a pass protection perspective, they're already running out of rolls.