Share All sharing options for: Suspended* Nittany Lions to Return for Alabama Game 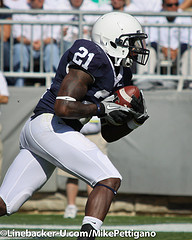 *The use of "suspended" in the headline is not meant to indicate any official declaration by the team, coach or program. It's meant only in a literal sense that these players were suspended from playing on the field last week.

Joe Paterno revealed in his weekly press conference today that a bunch of previously-suspended football players will return for this weekend's game against Alabama in Beaver Stadium. The players mentioned by Paterno were no scrub-teamers, either. Stephfon Green, Derrick Thomas, and Anthony Fera will likely get to play Saturday afternoon. This is a big deal.

Green, a senior running back who is the current leading career rusher on the roster, was suspended for the first game following a removal from the team this summer. Paterno and Green both indicated there were problems with classroom and other stuff, but have since been worked out by the coach and the player. Green is not only a valuable asset to the run game and screen game, but also on kickoffs.

Thomas played in the first few games of 2010 as a true freshman last year. The sophomore corner seemed to disappear from the team before the Iowa game, with little coming out as to the reason for his suspension. This Saturday will be his first live game action since September last year. Thomas has a lot of promise, and showed flashes of good play in his short time on the field so far.

Fera, Penn State's 2010 starting punter, returns after being suspended following his second underage drinking citation over the summer. While the punting game isn't nearly as dire as the kicking game looked in the season opener last weekend, Fera was a highly-rated placekicker coming out of high school. If he plays both at kicker and punter, it's only a benefit to the team.

This is huge news. It's kind of the feeling that Joe Paterno is clearing the bench for this game. He wants to win in the worst way. Nothing any of these players did would have warranted a suspension at 99 percent of other BCS program. But if it seems like Paterno is "compromising his principles" just to win a football game... well, you're right. Considering his principles are exponentially greater than most head coaches, this looks worse than it is.

With this move, Penn State gets back a very good young cornerback who has game experience, a very experienced fast running back, and a punter who can launch the football 70 yards, and also place-kick if needed.

Yeah, this is a big boost for the team. Enough to win the game Saturday? No. There are about a thousand other reasons Penn State could win or lose the game. But this does help swing the pendulum slightly away from favoring the Crimson Tide.

Ben will have the full press conference wrap up later today.