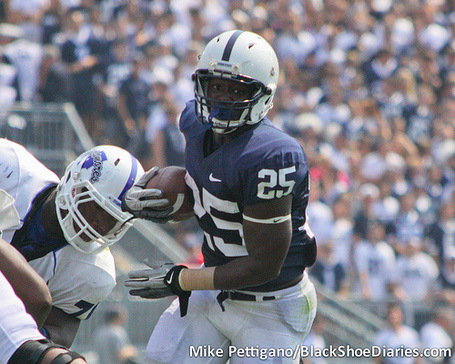 Finkle is Einhorn; Einhorn is Finkle. That's how it feels when reading some of the articles on both Alabama and Penn State heading into the 2011 season. And now that each team has seen some action, it appears that the two squads are dealing with the same issues. So who wins in a battle against yourself? (Queue philosophical debate.) In at least four areas, these teams seem very similar...on paper, at least.

1. Quarterback uncertainty. Penn State fans know all too well about the question marks under center for the Nittany Lions. Both played significant amounts last Saturday, and neither appears to have taken the job over. It would not be surprising to see both quarterbacks again on Saturday. In Tuscaloosa, the Tide are dealing with similar uncertainty.

Greg McIlroy is gone, and two talented signal callers are vying to be his replacement. Both A.J. McCarron and Phillip Sims saw reps against Kent State, and apparently Nick Saban is toying with the idea of playing them both against Penn State. Sound familiar? Paul Myerberg weighs in on Alabama's dual-quarterback system, and thinks that, despite Saban's apparent intention to play two quarterbacks, their competition has been decided. A game between two of the most successful teams in college football history might be decided by the play of four separate quarterbacks.

2. Offensive Line struggles. While our run blocking was (once again) relatively solid, our pass protection is woefully inadequate. Allowing three sacks alone is cause for concern. When those three sacks come at the hands of Division 1-AA Indiana State players, it's something to be ashamed about. Rob Bolden and Matt McGloin need time to go through their progressions and deliver the football. If they're constantly being hurried, hit and knocked around, things could get ugly against a stellar Alabama defense.

Similarly, the Crimson Tide are dealing with some line issues. They worked out a few different combinations against Kent State and still haven't figured out the one that works, or at least works best. Their offensive line appears to be the weak link of the offensive game plan, a sentiment that sounds very familiar. Their likely starting left tackle is Cyrus Kouandjio, a five-star true freshman that was recruited by Penn State but opted for Alabama and the chance of playing with his brother, Arie.

3. Dominant defense. Many believe that Alabama has the best defense in the country, returning 10 starters from a great 2010 unit. Penn State's lone question mark on defense was the defensive end spot, and the players that saw time there performed adequately-to-good against Indiana State. The defenses will carry each of these teams throughout 2011.

4. Strong running back. Trent Richardson is less a football player, and more a small horse carrying a football. He was held under 3 ypc against Kent State, but still managed three touchdowns. We saw him dominate our defense a year ago, and he'll look to do the same on Saturday. However, Penn State has its own weapon in the backfield with sophomore Silas Redd, who lived up to the hype by rushing for more than 8 ypc and two touchdowns, even if it was against a weak opponent.

So are these the same teams? Obviously not, but on paper, the two appear to be very similar. Coaching, preparation and execution will certainly determine the outcome, but in at least these four areas, the teams seem pretty evenly matched, for better or worse.