Since we're still in the midst of most teams' out of conference schedules, there aren't a ton of marquee match-ups this week. In fact, Penn State - Alabama is the only contest between two ranked teams. However, if you just do a little digging, there are some decent games peppering the schedule. A handful of big name programs have their first conference games of the season, and that always adds a bit of flavor.

All that said, we all know the nature of college football. Every game is crucial, even if it's out of conference. One loss could be the difference between going to the Capital One Bowl and the Rose Bowl, or between the Rose Bowl and the BCS Championship Game.

Enough chatter, let's get to the games.

MARK RICHT'S LAST STAND (again). People have been bellyaching about Mark Richt for a couple years now, but it's never been quite this intense before. If the Bulldogs lose this week to South Carolina, expect it to get much, much worse. A loss here puts Georgia at 0-2, and 0-1 in the SEC East. I will never say that a game in week two is a must win, but this is about as close as you can get to one. On the other side of the field, South Carolina will presumably be starting Stephen Garcia after the Connor Shaw experiment blew up in Head Ball Coach's face (again). The Gamecocks have too much talent on offense, and a pair of pass rushing demons in Jadeveon Clowney and Devin Taylor on defense. I don't think this game ends well for Georgia.

If you thought the Tigers were going to miss Cam Newton, you should see how much they miss Nick Fairley. Auburn needed two touchdowns in the last four minutes of the game to beat Utah State at home. Mississippi State atomized Memphis on the road. If you do the math, it adds up to an extremely inauspicious start for the defending champions.

Over the past couple years, Missouri has turned into one of those teams. You know, one of those teams that's always kind of floating around the back end of the top 25, regardless of whether they're any good or not. Last week, they scraped past Miami (OH) 17-6. Arizona State, on the other hand, dropped 48 points (albeit on UC-Davis). This year is THE year for the Sun Devils, as they are loaded with seniors and have a coach that won't make it another year without the team showing significant improvement. Mizzou has to come out to Tempe for this one, and I expect the ASU to come away with the win. Also, there's a significant chance Vontaze Burfict kills every person wearing black and gold in the stadium.

BUYER BEWARE: This game will be an OMGZ BLACK OUT!!!! for ASU. I know this isn't Georgia, but generally these types of things don't go well. Bad juju, but not bad enough to change my mind.

I have no idea what's going to happen in this game. I have no idea whether either of these teams are any good or not. BYU beat a not-so-great Ole Miss team in Oxford last week, but didn't look all that great in the process. Texas comfortably beat Rice, 34-7, but Garrett Gilbert was still rather Garrett Gilbert-y, and there still wasn't much evidence that the running game is suddenly viable. When you combine all that with the fact that BYU's defense will not be as supple and kind as Rice's, I think BYU wins. It won't be pretty though.

If TCU wants to have any chance of winning the Mountain West this year, they have to beat Air Force. The problem: Air Force is good. Last week, Robert Griffin III threw all over TCU's defense, but Baylor didn't have a more than an average-ish day running the ball. That bodes well for the Horned Frogs, as the Falcons run the triple option. QB Tim Jefferson is going to have to keep TCU's defense honest by successfully throwing the ball. He's capable of doing it, but the more troubling issue for Air Force may be that they gave up 20 points to South Dakota last week. That's not a score line that will trouble the TCU coaching staff. My brother's USAF, so my heart's with the Falcons, but my head's with the Frogs in a close one.

BUYER BEWARE: All bets are off if Air Force wears the Thunderbirds. Good lord that helmet is savagely awesome.

How much do you think it irritates USC AD Pat Haden to know that almost every week, USC is going to get out coached? It happened last week, and the Trojans were juuuust able to escape a not-particularly-good Minnesota team. This week it'll happen again, but Kyle Whittingham and the Utes will probably not be so accommodating.

Potential for Lane Kiffin DERPage: Moderate to high, or in visual form: 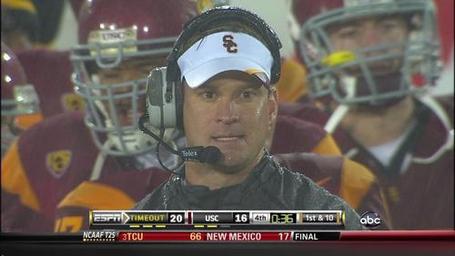 via the unstoppable @bubbaprog