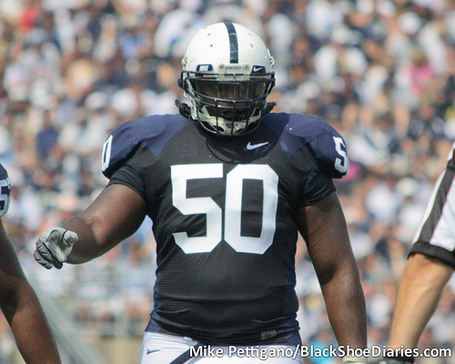 Time to get our depth chartin' on, y'all! Oh yes. I'm feeling very folksy today. Not sure if it's the mud outside, the Houndstooth hats mass migration toward Pennsylvania today, or simply because I'm growing insanely excited for the game tomorrow. No matter what, it'll be a wild atmosphere. I hope things turn out well for the good guys.

Anyway, the depth chart. Not much change this week. I'm still going with Bolden as the starter, because unless we're going off last year's criteria, a quarterback shouldn't lose his job because another quarterback played equally poorly. The running backs are and have been set, with the edition of Green in there. But I'm not really sure how much he'll actually see. Watch out for 3rd-and-long screen passes.

Szczerba is sketchy for this game, but I'm leaving him as the starter with little confidence he'll actually play. He got a slight concussion last week, so it's very unlikely he'll play. But, you never know. If he can't go, the Haplea steps in. Only small changes to the receivers, with Bill Belton moving on out (if we didn't see him last week, then he's obviously redshirting 2011) and Allen Robinson staying.

The offensive line... hmm. Looks like we're moving back to the combination we kind of thought would happen all along. Troutman played a lot more last week than Pannell at the left guard spot. So Pannell gets the nod at right guard, supplanting Urschel. Urschel could still start, but I'm going with Pannell. Also of note, with Mike Farrell out, Adam Gress came in last week as his first replacement. So he bumps up a spot.

Stanley got the start last week at defensive end, but it could have been the result of which offensive package ISU brought out first. I'm sticking with Latimore as the primary end opposite Crawford. Latimore did play overall much more than Stanley last week.

When Penn State went into its nickel and 3-3-5 packages, they used three cornerbacks. I anticipated three safeties. So, with that, I've adjusted Lynn into the NB spot, with Morris (who I thought played more than expected last week) as the fill-in for him when in the 5-DB sets. Amos remains, since he obviously had a career day on his first, uh, career day as a Nittany Lion. I'm thinking Thomas is called up for a few plays this week.

Finally, Fera is going to punt. But I can't fully project him to "start" right now. My guess is that he gets in for the first critical punt (WTF does that mean?!) of the game, but does start off on kickoffs. No way Lewis makes a field goal attempt this week.