Share All sharing options for: Preview: Alabama at Penn State 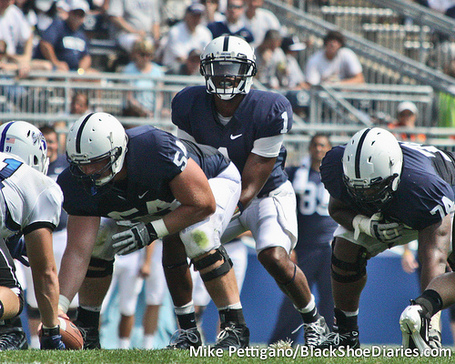 Quarterback Roulette. Common sense would dictate that Rob Bolden and A.J. McCarron get the majority of the playing time. Alabama observers universally described McCarron as looking better than Phillip Sims last week against Kent State. The reviews on Bolden vs. Matt McGloin were more mixed (this guy thought Bolden was a clear notch better than McGloin, for what it's worth).

Joe Paterno had little interest in giving away free information about the quarterback derby at his press conferences, and the news cycles have been so dominated by flooding and parking woes that the situation has simmered neatly on the burner all week. What will be interesting is the criteria used to alternate between Bolden and McGloin, especially going from a game in which a touchdown was expected on every drive to one in which stitching together a few first downs is a bragworthy accomplishment. Unfortunately, we're now in a situation where both guys are simultaneously looking over their shoulder and looking to separate themselves by making a big play. Bad combination. Whoever the quarterback is, the coaches need to be patient with him.

Must Win? Of course not. This is an opportunity. One of the JoePa'sDoghouse guys opined that this would be the biggest win for Penn State since the 1987 Fiesta Bowl. It's a compelling argument. I think a proper analogue would be 1990 Notre Dame -- an amazing accomplishment in an otherwise average year, completely erasing the memories of anything else that happened during the season. It's a chance to be taken seriously again on the national stage, and it is to be seized, not squandered.

Turnstile, Meet Banana Peel. Of course, none of this actually matters if the Penn State quarterback can't be kept clean. You think Nick Saban and Kirby Smart didn't notice the laughable pass protection against Indiana State? If Alabama can produce similar results rushing four or five men, it's going to be a long, embarrassing afternoon for the Penn State offense. This should be your biggest fear. Probably your second and third biggest fears, as well.

Ill Communication. The home crowd (if it shows) will be vital against an Alabama offense that threw four interceptions and fumbled four times. Giving up an early one-score lead to Alabama is not desired, but not fatal. Play from down 10-0 or 14-0 against the Tide defense, and bad things will compound. This is a team and fanbase in desperate need of irrational overconfidence, despite past results:

And no, I have no idea what is going on behind that chair. Let's not discuss it. Whatever it may be.

Oh, Speaking Of Certain Death. An absolute must for Saturday afternoon: don't give up defensive or special teams touchdowns. Interception returns, punt blocks, and the like cannot be absorbed by Penn State's still-questionable offense.

What To Hope For. No free points for 'Bama. A sustained pass rush. Solid tackling upon first contact. No horrible special teams gaffes. A miracle or two.

The Lions hang for a while but succumb to a combination of their own mistakes and Alabama's talent. Penn State will need a little help from the Tide, but they'll need to help themselves, too. If Jack Crawford and his defensive line mates can't get pressure on the Alabama quarterbacks, Tom Bradley needs to get creative. If the Penn State secondary is supposed to be one of the best in the conference and nation, let them prove it against Alabama's talented receivers and blitz some linebackers.

This is very likely a much better team than the one which lost in Tuscaloosa last year (we'd like to think we know for sure, but Indiana State). I can't help thinking this one swings on a defensive touchdown or special teams play for Alabama, and the Penn State defense eventually wears out in the second half.