Penn State has been eyeing, scouting and honing in on the 42-year-old O'Brien throughout the past month, sources said. He fits the profile of the head coach Penn State has been seeking. O'Brien is well-schooled and has a mixture of experience at the college and pro levels. In an odd coincidence, O'Brien even attended and played football at Brown, as Paterno did.

O'Brien is in the last year of his contract as the Patriots offensive coordinator.

Penn State has attempted, and largely succeeded, to conduct its head-coaching search at the highest levels of secrecy. What can be confirmed is that, at the outset of the search, Penn State failed to land some of its top choices for the job. Former Colts head coach Tony Dungy and Boise State head coach Chris Peterson all received interest from the school, and each relayed to Penn State that he was not interested in leaving his current job at this time.

USATODAY's Jonny Saraceno followed up later in the afternoon: 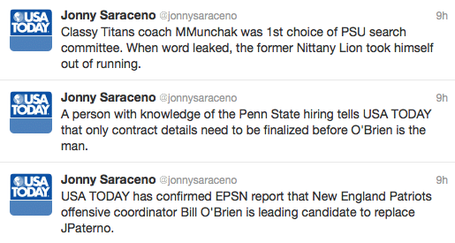 Dave Joyner, true to form, denies everything about everything:

How real is this? No idea. The Boston media isn't exactly biting, and this could very well be O'Brien and his agent positioning him for a NFL head coaching position:

... there has been no contact and no negotiations. He may be their top candidate, as reported, but nothing has progressed.

In addition, O’Brien won’t take anything without seeing what the NFL world has to offer. His star is as bright as possible now. He will sit back the next few days, see if any NFL teams come calling, then move forward. O’Brien is not ruling anything out. Just waiting.

“Any imminent contract signing or agreement (with Penn State) is just off-base,” Linta told me. “The most important thing for him is to win the Super Bowl. But if someone is going to be interested in him in the NFL, it’s going to happen this week. He could be going somewhere else, he could be returning to the Patriots. But we’ll wait and find out if someone is interested in him and seeks permission to talk with him.”

Granted, we're all playing a game of shadows here, but this doesn't sound like someone ready to take the Penn State job. It sounds like someone who wants the Tampa Bay Buccaneers job.