Only seven days left in the Class of 2012 recruiting period, which culminates on February 1 with National Letter of Intent Day, commonly referred to as Signing Day, the first day that high school seniors can officially state their intent to play college football with a certain school. Until then, everything is verbal and non-binding; once ink meets paper and paper meets fax (one of the last remaining vestiges of that godforsaken machine), a contract is formed with certain requirements and expectations.

At Penn State, Signing Day typically comes and goes with little fanfare. The Joe Paterno Era Style of Recruiting was to get the class finished early and concentrate on the actual football. While there has been notable last-minute excitement in the past (see Henne, Chad; Shaw, Michael), for the most part, Penn State fans get to watch everyone else squirm as "results" come in for the higher profile players.

Those high profile players will be covered slightly in next week's open Signing Day thread. Today we take a look at the Class of 2012: who's in, who's out, what's left, and what are the overall impression.

Who's In - The Future Penn State Nittany Lions

As of this morning, Penn State is sitting tight with 19 commitments, including will-he-or-wont-he PA QB Skyler Mornhinweg. Until we hear word otherwise, Mornhinweg is in. The commits, by commit date:

By position, the commitments break down as follows: QB - 2, RB - 1, WR - 4 (Malik Golden is being looked at here by the Penn State staff, but a switch to DB is entirely possible), TE - 2, OL - 2, DL - 4, LB - 1, DB - 3. Certain positions have been stocked well (WR, DL), but there are still needs in this class. Another offensive lineman would be a plus, as well as at least one more defensive back. A second running back would be nice, but unlikely. With only Derek Moye leaving the receiving corps, there is a good possibility that at least one of the four wide receivers in the class will move to the secondary.

Who's Left - The Prospects, With A Week To Go

As you can imagine, the vast majority of recruits have given their verbal commitment to play college football by now, including our own 19 commitments above. However, not everyone is as sure as those players, and some need time to make their final decision. This choice, after all, will affect the rest of their lives. But, as stated above, Penn State typically doesn't end with too much fanfare, so the remaining prospect list isn't too long. However, keep an on the following:

Of these, there are some almost-certainties and some developments to watch. I'd be truly shocked if Schwann did not end up as a part of this class. Schwann will likely commit on the spot once he finally receives his offer.

Boyd, Moore, Whitehead and Hankins are all southern offers, the first three being high school teammates. Their offers alone represent a breath of fresh air from this staff, who seem intent on making southern recruiting a priority. Of these four, I'll guess that two end up at Penn State. Boyd is a likely candidate, while the other two are slightly higher in terms of stars/offers. Moore has offers from a lot of southern schools, while Whitehead is a current NC State commit. Hankins likely won't be on campus, but anything is possible.

Finally, there's Demetrious Cox. He is going to be the prize recruit at the end of this class, and will likely take this thing down to the wire. Ohio State, Michigan State, Wisconsin and Pitt are all making runs at the talented western PA defensive back that hails from the same high school as Penn State's last down-to-the-wire recruit. The class's success will not be made or lost with Cox, but a commitment from him will go a long way to keeping this a decent-to-solid class in a year that could have ended a lot worse.

How Many More - Crunching the Numbers; Or On Scholarships and Oversigning

Some quick math and explanations: By our count, as of today, Penn State football has 65 scholarship players on the roster, not including fifth-year senior Brandon Beachum, who has reportedly left the team. 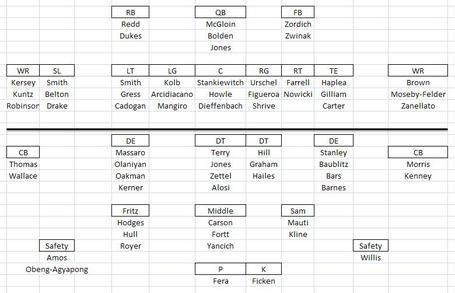 Adding the 19 Class of 2012 commits from above, and the current scholarship number sits at 84. And here is where it gets interesting. Despite being one of the more vocal critics of oversigning, the Big Ten conference actually allows the practice, within moderation. Big Ten schools are allowed to sign an additional three extra players than their targeted class, which means that on February 1, the scholarship list can actually total 88.

This means that Penn State has room for four more commitments, provided all 19 commitments stand. Two of the prospects above will likely end up at Penn State, which leaves two more spots. If Cox takes one, that leave a final opening for a Class of 2012 commit.

That doesn't necessarily mean they must all be used, though. One or two scholarships going unused by a school is nothing new, and the normal procedure if it happens is to reward a hard working junior or senior with a free ride for a year. It's happened at Penn State before, and I wouldn't be surprised if it happened this year. This would be a one year deal, and the scholarship would be then thrown back into the pool to be used toward the Class of 2013, which at first glance, looks like it will be on the small side, with only 15 seniors on the 2012 roster.

Who's Out - The Once and Former Nittany Lions

Before we leave, we pay tribute to those we once cared for, but who have moved on to greener pastures. In case you've been under a rock for the past three months, the Penn State recruiting class has seen it's share of bumps along the way. The following players were, at one time, committed to Penn State, but have since parted ways. The former commitments, with their new school of choice:

Once named the new head coach, Urban Meyer and Ohio State went to town on our committed players, though the major scandal didn't help matters. It's tough to hold any sort of grudge against these kids, as they are only trying to make the best decision for themselves. But it's similarly difficult to look at that list and think "What if..." Maybe they'll turn out to be busts, but there is some solid talent on that board, players that the Nittany Lions will eventually see on the playing field.

(As for the two uncommitted prospects on that board, my guess is: Reeves to Michigan, Holtz to Pitt.)

Where do you even begin to discuss this class? On November 1, 2011, the Class of 2012 was shaping up to be one of the best in recent history, and Penn State was at the top of many highly rated recruits short lists. After that, things fell apart. As you can see above, there was a four month pause between commitments while the Penn State name and reputation came crashing down. Additionally, a head coach was fired and a new one wasn't named for two months, a period of uncertainty that didn't do any favors to the recruiting efforts.

From a pure stars/offers standpoint, this class is mediocre at best. It's going to be ranked somewhere in the 30-40 range by the services, and that's being kind. At the time of this post, the current rankings are: 247Sports (34), Scout (37), and Rivals (44). Adding a couple more commitments, especially Cox, will nudge them up, but in a pure numbers perspective, this class isn't anything to write home about.

However, we all know that numbers aren't everything. Could this class end up being mediocre, as targeted by the services? Yes, and history tells us with relative certainty that some of these players will never see meaningful time at Penn State. But could there be a Daryll Clark, Deon Butler, or some other diamond in the rough? Yes, and that's what fans are hoping for.

Tune back in next Wednesday (and everyday, for that matter) to see how this class ends, officially. The mothership has you covered, as well. As per usual, we'll have an open thread going to watch the other top players make their choices. And let's hope that there aren't any big surprises for Penn State...unless of course some of those former commitments want to rejoin the class. In that case, I think we can make an exception.

I don’t think there is any doubting that LJSr. will continue to blanket the VA/MD/DC area with his man hugs. But what about everyone else. A member of 247Sports with a good deal of knowledge on Penn State recruiting and a solid reputation for quality recruiting information posted the following predictions, based on the staff’s previous responsibilities, reprinted with his express permission:

I tend to agree with a good deal of this. Some of it will change as we see which recruits are talking to which coaches, but we know a lot of this is true already. Roof is going to be our Georgia man, while BOB has made it clear he wants multiple coaches in Florida.

Noticeably absent are two core states. New Jersey is difficult, as we’ve never done too much damage there. Though talent levels aren’t ever extremely high, it would be nice to be able to establish some good ties to the area. John Strollo is from NJ, but Vanderlinden and Butler have each recruited there as well.

The other state is Pennsylvania. BOB has stated that each coach will have an area of PA to recruit, but splitting PA into 10 distinct areas seems silly, so it’s likely that BOB meant the state will be split up into sections, and coaches assigned. Who takes those sections is still a guess. You’ll notice above that Vandy is a good choice to take over the bulk of the midwest, so assigning him western PA makes a good deal of sense.

A Signing Day podcast is set to be recorded this weekend. Look for it early next week, before the Signing Day festivities. The podcast will feature Penn State, Ohio State, and Michigan bloggers that cover their respective teams recruiting discussing the Class of '12, how it will finish, and what to look for in the Class of '13.