The Big Ten Wrestling championships start in just over a monthbut Penn State is in peak form right now. A week after dismantling Iowa 22-12, the Lions beat Ohio State 34-9 winning 8 of the 10 bouts. It was thorough domination, in its eight victories, Penn State did not give up a single takedown. I predicted a 25-13 victory for Penn State and I thought that was being overly optimistic. The Lions were solid at almost every weight class (except for 133), even Bryan Pearsall wrestled well in his 9-5 loss to 6th-ranked Hunter Stieber.

The true freshmen both wrestled well even though the score may not show it. Nico forced the action against 15th-ranked Johnni Dejuliusand built up 2:41 in riding time. Morgan McIntosh escaped with a one-point victory but the match shouldn't have been that close. An injury to McIntosh forced him to call a time out which now results in your opponent getting his choice after the bout resumes. Even though Morgan had two takedowns more than Campolattano, he started the third tied 4-4 because Campolattano got an extra point from an extra escape due to the injury.

This is why we call it Murderer’s Row, if you get to 165 and don’t have a good lead on Penn State, you are dead. Ed Ruth dismantled the 8th-ranked 174 pounder before getting the fall. That should tell you everything you need to know about Ruth, he’s a step above the wrestlers in the lower top-ten. Taylor does what Taylor does: beat people into submission. Quentin Wright actually looked like he was having fun out there. He looks quicker as the season wears on and is always looking for a pin. 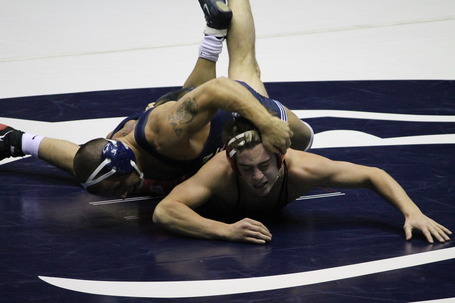 What would a Wrestling Wreport be without a photo of Frank Molinaro trying to rip an opponents face off?!?!

Molinaro and Alton combined to shut out two ranked opponents. Alton built up almost a minute and a half of riding time and Molinaro had 5:20 (NOT a typo). Cameron Wade had another great match against a ranked opponent. Wade used back points and his strong ride to beat Capone but Cam is shooting more, especially in the first period.

Even in a loss, Bryan Pearsall wrestled well, he never gave up and was shooting till the end. Pearsall put together a good ride in the second period and had several quality shots in the 3rdbut could not convert any of his attempts. Bryan is going to be Penn State’s wild card come tournament time. If he can get into the NCAA’s he can do some damage for the team.

I don’t know if it’s just me but the officiating seems to get more and more spotty as the season moves on. Several Ohio State wrestlers used Russian ties to slow the better Penn State wrestlers down but never used it as an offensive move. It should have been called stalling especially if they never use it to set up a shot and use it defensively. Ohio State used the same approach against Penn State that Iowa did and got the same results.

Frank Martellotti got pinned a week after getting pinned against Iowa. I don’t expect Frank to beat a great wrestler like Stieber but it doesn’t even seem like he’s putting up a fight. Martellotti is not wrestling like he did last season at 125, maybe the jump to 133 was too much. One thing’s for sure, he’s not going to get very far in the post season if he wrestles like that.

Up next: Penn State travels to Nebraska, Friday, Feb. 3, 8 p.m. and welcomes Michigan for a 2 p.m. dual next Sunday.