There were plenty of topics at Pat Chambers' weekly press conference today, but not many questions focused on the Wisconsin Badgers. We received a more definitive injury update on Billy Oliver and Trey Lewis, and some light was shed on the decision to release Peter Alexis from his scholarship.

Chambers confirmed that Oliver has been suffering from concussion-like symptoms. If you still don't know Billy's injury past, he suffered a concussion in his first ever week of practice at Penn State in the fall of 2008. He then suffered another one later in the season. Two concussions in one year ended his freshmen campaign prematurely. The following year he suffered from exercise-induced headaches and was unable to participate for the second season in a row. Therefore, last year was his first full season playing basketball since high school. He's listed as a red-shirt junior on GoPSUSports, but he would very likely be awarded a 6th year if he so desired.

Chambers said they are being very cautious with Billy's status, because of his past. Technically they are taking it day-to-day and Billy will undergo more testing from doctors. However, there is no denying that if these complications can't be explained by doctors, this could very well be it for Oliver's playing career. This is a situation that will be monitored the rest of the season. It's unknown if and when Billy Oliver will be back on the floor for the Nittany Lions.

Chambers also confirmed that Trey Lewis does indeed have a stress fracture in his back. These kind of injuries have various recovery times, but Chambers didn't say there was a timetable for Lewis' return. Usually with this kind of injury, there's a period of rest to allow the fracture to heal, followed by a couple weeks of rehab. Trey's been out since the beginning of January. It is possible his season could be over, but I wouldn't say that for sure. Either way, he's not going to be much of a factor for the rest of this season.

The topic everyone wanted to hear about was what happened with Peter Alexis. Our man Ben Jones got the story from both Alexis and Chambers. Alexis was indeed 'carefronted', but it seemed like a mutual decision was reached. Alexis had been having talks with Coach about his future in the program, and Chambers was brutally honest in telling him he couldn't guarantee Pete that he would see time on the floor. Alexis still wants to have a playing career somewhere else where he can have an impact, so it's not likely Alexis will return as a walk-on next year. All indications from today say that Chambers did not run off Alexis, and he'll do whatever for him as he looks to transfer to another program. We wish Peter Alexis all the best in the future and thank him for sticking with the team through the rest of the season.

With Alexis officially out of the picture, here's the updated Scholarship Matrix: 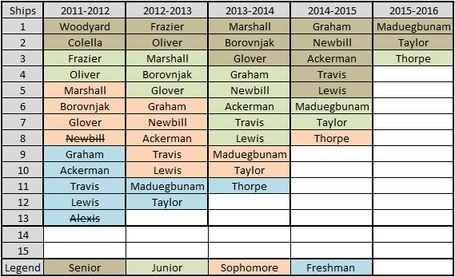 This leaves the staff with an extra open scholarship in 2012. 6'7" F Sheldon Jeter is the most likely candidate to fill it, as he's been offered and officially visited this month. Penn State is in contention with South Carolina, Wisconsin, and Pittsburgh for his services. He'll likely make his decision after taking two more visits to Wisconsin and South Carolina. PSU sits in a great position to land Jeter, and it only helps when a local like Geno Thorpe is helping the cause. For highlights, articles, and everything else you need to know about Jeter, check out Bucky's 5th Quarter's page. You will not be disappointed. #DoworkPat.