Share All sharing options for: Depth Charting the 2012 Offense - Quarterbacks 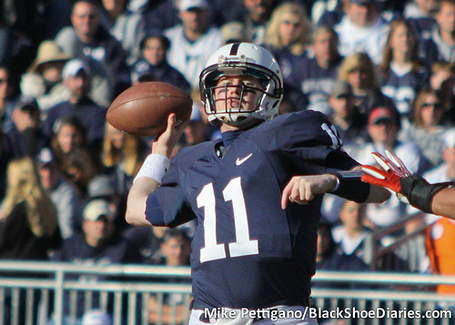 Hey, you guys remember 2011? Yea, me neither. So let's take a look at the 2012 team from a player-personnel standpoint. We still (!) have no idea who will be coaching these players, but after waving goodbye to some important cogs this spring, those who remain must find a way to put a miserable year in their rear view mirror and concentrate on the future.

In a sentence I never thought I'd ever write, Matt McGloin is the odds-on favorite to start 2012. Provided he doesn't have Crosby-like concussion symptoms, he'll be the man to beat as a redshirt senior and the most successful quarterback on staff, an honor just slightly above being named World's Tallest Midget.

McGloin went 125-for-231 this season, with eight touchdowns and five interceptions in 13 games (five as starter). He technically attempted 24 rushes and netted -20 yards, which is as indicative of his running ability as it is of Penn State's pass blocking. Finally, and in a slightly ironic twist, McGloin was on the receiving end of a Curtis Drake heave against Nebraska. It wouldn't be the last time Drake connected with McGloin.

Behind McGloin, it's anyone's guess, as there will hopefully be three quarterbacks that will each be battling different obstacles in their attempt to knock McGloin from his perch. There is also a concern that none of them will ever see a snap in a Penn State football game, but we're remaining optimistic. For now.

Junior Rob Bolden was the heir apparent at the start of 2010, but has regressed to the point where fans were calling for Shane McGregor in the bowl game and the coaches were calling for three straight Bill Belton wildcat plays in the second half. He finished 2011 a miserable 53-for-135, throwing just two touchdowns to counter his seven interceptions. He managed to have a positive net rushing yardage, and was agonizingly crisp on a number of passes (consistency!), but has been mediocre-to-bad in two seasons. 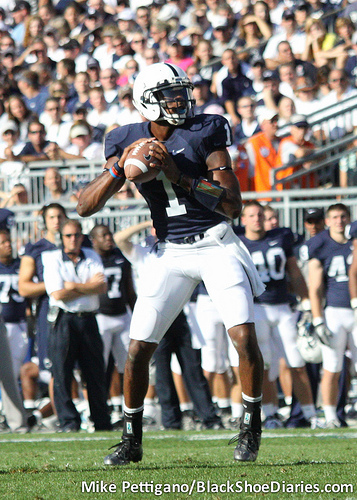 And it's not necessarily that Rob is a bad quarterback; it's been said here and other places, Rob Bolden needs to be broken down to basics and actually coached up to his potential. He came to Penn State with a strong arm, great mechanics, and the potential to be great. With a new coaching staff including a QB coach not named Jay Paterno, and the sky could be the limit.

There are questions (again) about Bolden's future with this team, but at this point and with his collegiate resume, I'm not sure there are many suitors. He has said he'll be back in 2012, but we've played that game before, and last time it ended ugly.

Redshirt sophomore Paul Jones has had issues with his academics for seemingly his entire time at Penn State, and his absence in Dallas spoke volumes as to his current state of affairs with the team. He remains supportive of his team off the field, but until he can get his grades in order, he might be a five-year cheerleader and scout team QB. 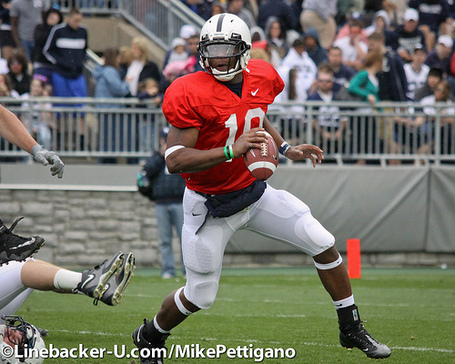 Like Bolden, Jones came into Happy Valley with high expectations, a five-star pro-style QB from Pittsburgh. Unlike Bolden, though, Jones hasn't seen action in two years, so it's tough to gauge how he might fare in real time competition.

Finally, Skyler Mornhinweg already has a busload of supporters, not unusual for an incoming freshman on a team that is struggling. Unless he comes in and wows the coaches, the smart money should be on a redshirt year for Mornhinweg. Would Bolden have benefited from a redshirt year? It's hard to say, given what we saw in 2011. But it certainly can't hurt for a player to come in and learn the playbook, get into a collegiate weight program, etc.

Once again we head into an offseason with a quarterback controversy on our hands, but at the moment, it's only the third most talked about Penn State topic, so maybe it'll stay under the radar this year. Keep an eye on spring practice to see if anyone stands out (they won't) or if the new coaching staff continues to use Joe-speak (hopefully they won't).