Bill O'Brien is taking over at Penn State, and there's reportedly nothing you can do about it. How about a short message before we get to the qualifier?

By all accounts he has never cut the sleeves off of a sweat shirt. And can speak civilly as well.

DEWEY DEFEATS TRUMAN, right? This isn't your run of the mill Pitt to the Big Ten twitter snowball. Not only is plugged-in ESPN reporter Chris Mortensen the source here, this is no tweet n' run. The original tweet doesn't even link to a story, and ESPN has excluded the word "Report" as a preempter to any news, as they are fond of doing: 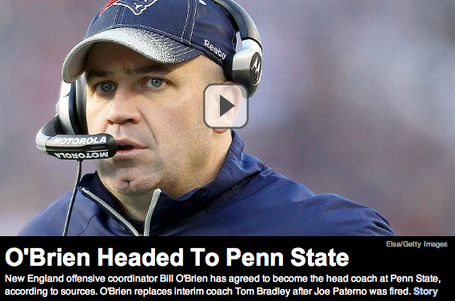 ESPN might be wrong here, but if so it's as bad a report as Herbstreit's Les Miles to Michigan announcement, which I suspect they've learned from. The Pennsylvania papers are still floundering here, suggesting that ESPN is using their NFL team ties to break this, running an end-around on the locked down PSU search committee.

Penn State is reportedly going official with this on Saturday; if the news is true and they actually wait that long, every suspicion about Penn State's total ineptitude at controlling the message in the face of obvious leaks will have been confirmed.

And most concerning, of course: it's already on his wiki page.

Will he stay with the Patriots through the playoffs? Concerning:

The precedent everyone is talking about now is that of Charlie Weis and his December 2004 hire at Notre Dame. He stayed on with the Pats through the Super Bowl, and was allowed to recruit "during his lunch break."

It wasn't very effective. Even with the buzz and hard-to-dispute-at-the-time offensive wisdom Weis brought, that class finished 40th and light in number. Coincidentally, Penn State sits 40th at the time of publication in this year's class.

Through the work of the (still technically) current interim staff, a very big recruiting weekend is set for January 13th, a day O'Brien would still be calling NFL plays if he does in fact finish up his current lap.

You knew this. Here's a nice collection of player reactions -- a combination of surprise, helplessness and excitement.

Pay me my money down. The cost will be telling. If Post-Paterno comes cheap, something Graham Spanier laughably said was inevitable despite Penn State being one of the most valuable brands in college sports, the explanation that this as a bridge hire exists.

If it's not? No one wanted this job. Not only that, even if the experience-lacking hire works out, he's publicly said - and recently - that he prefers a pro job to a college one.

Details will tell you everything you were denied as this developed over the past couple of months. This is either buying a rising star just before takeoff, the spark of an offensive revolution and an energetic young leader moving to State College -- or, conversely -- an inexperienced filler hire, made in a panic, to a candidate with the pedigree matching a long list of former Pat-turned-failures before him, and a flight risk to boot in the event things do work out in three years.