Or, how Cari broke her streak of attending losing away/bowl games.

Share All sharing options for: The Complete Iowa Experience

I've gotta say, I was nervous on Friday when I left Maryland to fly for Iowa for the game. I had nerves similar to those I had going to the game at Virginia this season--feelings that had nothing to do with how our team would perform on the field (because, with all the great ups and downs of the season, I love this team and will support them no matter what), but rather how we (and, most specifically, my die-hard Penn State fan mother) would be treated in enemy territory.

Lo and behold, with UVA and most especially Iowa, my fears were completely unfounded. 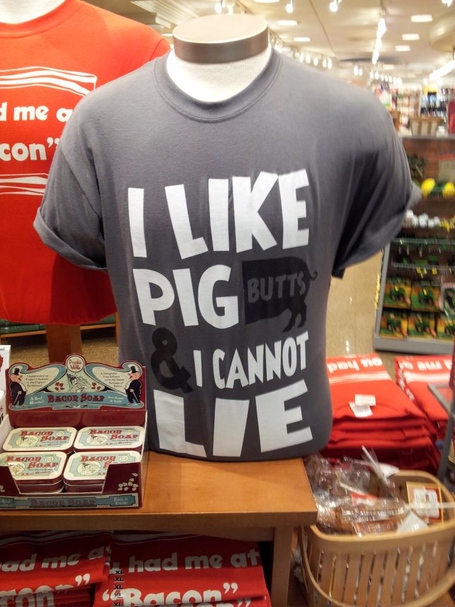 Oh, Iowa...you had me at the airport gift shop's Sir Mix-A-Lot reference.

After a slight flight situation (rectified to the best of their ability by the nice people at United), we arrived in Des Moines, a few hours later than expected. I get the email that my extra game tickets have been sold on StubHub for a bit of a profit--score (especially since they were probably sold to some unsuspecting Hawkeye fans who were undoubtedly disappointed)! We go to our rental (an awesome upgrade, much cheaper than advertised) and what color Ford Edge does the company offer? Cobalt blue. Penn State blue. It's going to be a good weekend.

We drive halfway to Iowa City, to our hotel in a town called Grinnell, IA. Not a big city, by any stretch, but the people there were nice, the hotel was reasonably priced, clean and pretty with refridgerators, a gym, an indoor pool and free breakfast and possums running around the parking lot after dark. Bedtime comes early because, really, it's going to be a long day on Saturday--the last nighttime "away" game I'd been to was the Orange Bowl, and I'd rather prepare for being out until four in the morning than have it take me completely unawares again.

On our way out of Grinnell, we stop at the local Wal-Mart to pick up long johns (it's chilly, yo!) and a new set of headphones for me (damn you, Family Clothesline, and your cheap but irresistible Penn State earbuds)--and while deciding on which earbuds to pick up, what seems to be a manager comes up and tells me, with a grin, that they do sell Hawkeye gear if I'm interested. As I'm decked out, head to toe, in blue and white, I pleasantly decline, saying I have enough other people trying to get me to buy it, anyway. Turns out the management-type person was the cousin of Tyler Sash, former hot Iowa safety and current New York Giant (boo!), whose father apparently went to Penn State. He's very nice, and excited to be able to go to the game that night.

On to Iowa City/Coralville, for AIRBHGPALOOZA! We arrive after the pinata has been demolished, but in time to meet up with some really cool people (Carfino's Way, Stanzipants & EnergizerHawk, amongst others, from BHGP, and BSDer Swiddy) and watch the bulk of the Ohio State game. Note to anyone ever in the Coralville area: go to Backpocket Brewery. Great beer, awesome pizza. Good times.

After the letdown that was the end of the OSU-Purdue game, we all pile into my rental (seriously, how cool is the 2013 edge?) and Carfino's Way gives us a drive-through tour of the Iowa campus (verdict: small, but very pretty) before we park close to Kinnick ($20 for a five minute walk to a parking garage--I think I've got the luck) and tailgate for an hour or so. Literally the only rude person we met the entire weekend was as we were leaving the parking garage; a probably drunk student-type person makes a barely-audible Sandusky comment as we get onto the elevator. As everyone else has been nothing short of awesome, I let it slide as an anomaly.

The fam and I head over to the Penn State Alumni tailgate, where we meet up with Swiddy and a friend again, watch the pep band and the cheerleaders pump up what few Penn Staters were there (not many) and the Nittany Lion practice his one-armed pushups (only did 30--clearly not enough). Twice on our way into the stadium were we stopped by Iowa fans, strangers, who wished us well and said they hoped that we had had a great time in Iowa City, and were treated well.

It's a beautiful (HISTORIC) stadium, not beautiful in an erector-set sort of way like Beaver, but definitely charming. Getting in and out was a breeze compared to Penn State, and the food selections and prices seemed comparable. We saw most of our team warm up, and the sun set as they ran in before the pregame. There were fireworks and the traditional "Back in Black" as the Hawkeyes took the field for the America Needs Farmers game (rally towels were on every seat), and then our boys entered to a stadium filled with boos. How they looked when they ran in was indicative of their later play on the field: all business, little emotion, not letting anything phase them. 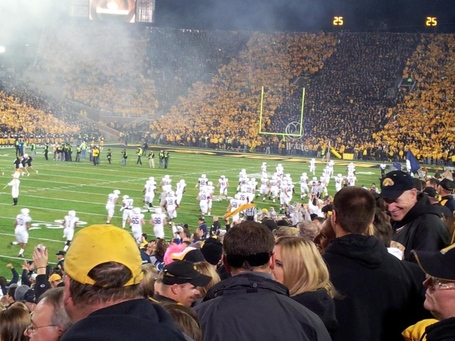 I'm still unsure as of this writing (as I've not yet rewatched the game) who won the toss, because it was the first game all season where we didn't receive the opening kickoff. The game started as most Iowa-Penn State games have in the past, with trading punts (though the first opening penalty on us, exacerbated by an Iowa fan nearby yelling "CHEATERS!" when the penalty was announced, was not). I've been to a few away games, and bowl games, but I can honestly say that Kinnick at night was the loudest non-PSU stadium game I've been to--and it wasn't even close.

After the remarkable Matthew McGloin pass to Jesse James for a touchdown about 7 minutes in, the crowd quieted somewhat, but still showed signs of life. The surprise in the stadium when Iowa's vaunted kicker, Mike Meyer, missed his first field goal seemed palpable, but the Iowa fans still knew they had a chance, and yelled like it.

Those yells became quite like whispers, though, about twelve minutes into the game, when McGloin threw his second touchdown pass, and the rout was pretty much on.

After what felt like his twentieth errant pass of the night, Iowa QB Vandenberg had boos raining down on him from all angles.

After one penalty against the Nittany Lions, an Iowa fan behind me seemed despondent. "Oh, just let them have it!" he grumbled.

Students started clearing out at halftime. I was on an aisle, and hi-fived every Penn State person that came our way during the breaks. Most of what Iowa fans stayed past the half, if they hadn't cleared out after the Vandenberg interception early in the third quarter, did so after the Penn State score to start the fourth. 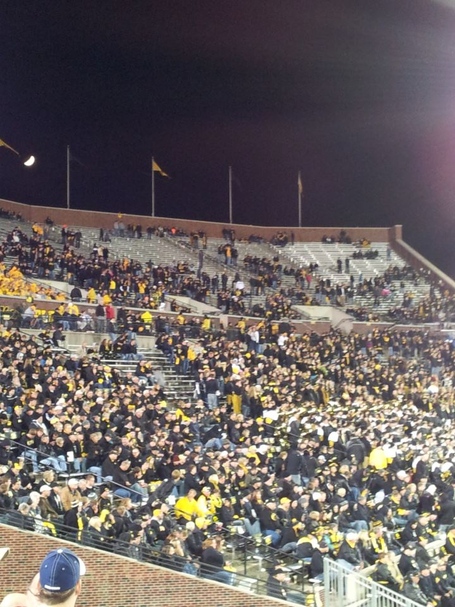 The stands at the beginning of the fourth quarter.

I have to say, too, that as kind as the Iowa fans were to us before the game, they were even as gracious in defeat. I'm convinced that if it had been close, if their team had shown the signs of life so apparent in their alumni and fan base, we would have been treated differently after a loss, but from our hotel to the airport the next day, multiple Iowa fans stopped us to talk about the game--as did the few Penn State fans we saw in the Des Moines airport the next evening. I've now got plans to visit again in 2016, and hope that we play gracious hosts in 2015. Because, while the Iowa team may have played spoiler to us in many a year past, this year was different.

And it was awesome. 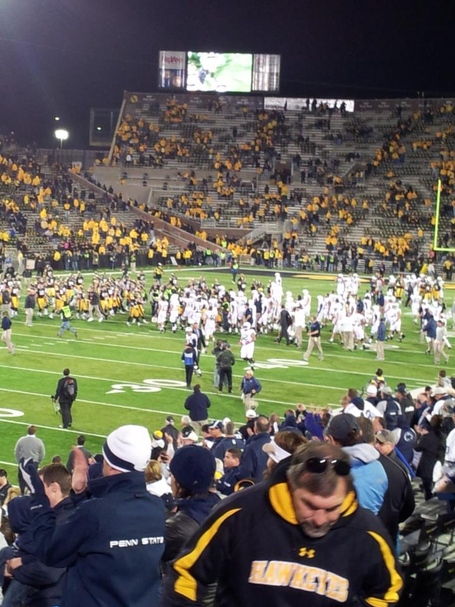 Shout out to my sister for the use of her pics throughout this post. And for just generally being cool.