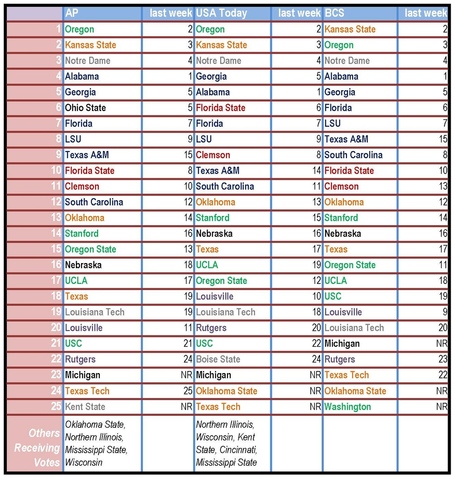 Some not-unexpected shuffling occurred at the top this week with Alabama's loss to Texas A&M, but the SEC is still very top-heavy (no teams ranked outside the top ten in the BCS).

Non-BCS schools look stronger than usual this year, with Notre Dame at #3 in all polls and Louisiana Tech in all polls, and Northern Illinois inching towards the rankings...and, what's that I see? Kent State is ranked in the AP? (Paging Jared...)

The ACC is just Florida State and Clemson, and the Big East drops a bit with Louisville's loss (Rutgers is the other team in the polls from that conference).

Michigan reenters the polls again this week, and Nebraska is still the highest Big Ten team in the BCS (Ohio State being the highest overall, at #6 in the AP poll).

Personally, I'd like things to stay pretty much the same over the next few weeks--I'd look forward to an Oregon-KState National Championship. What say you all?