We've got a new number one across the board in three weeks...and most of us will be none too happy with it. 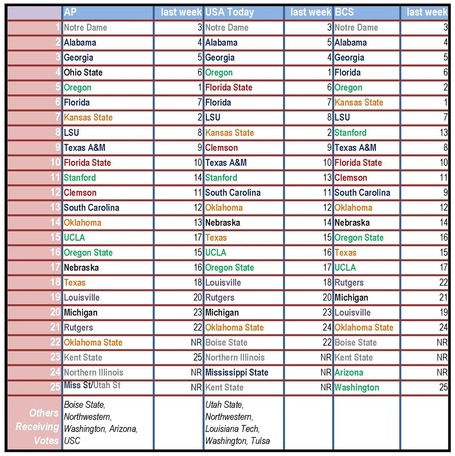 Now, aside from the #1 grossness that is this week, I just have to rant for a minute.

Let me preface this by saying that, like a good Penn State fan, I hate Ohio State. With the burning, fiery passion of a thousand suns. That being said...how can AP voters, if they're voting Notre Dame #1, have Ohio State FOURTH, behind Alabama and Georgia, who each have a loss? It's inexcusable. I've heard whispers that they were dropped below them because they're bowl-ineligible, which is the most ludicrous of reasons--polls aren't there to vote who will win the bowls, or even who would win head to head. They're who the best team is, ranked. And how an undefeated Ohio State is behind two SEC teams baffles me. It probably shouldn't, as the SEC bias is evident in everything that we see in college football today, and it's overblown unfounded hype. And this is the first year I can confidently say that they hype is unfounded, as a team that last won the Big 12 (a conference universally derided for its lack of defense and nintendo-like style of play) in 1998 comes in and goes 5-2 in the conference in its first year (in one week, they'll be 6-2 thanks to Missouri). They couldn't win in the Big 12, and in their first year in the OMGSEC, they defeat the defending national champion Crimson Tide IN TUSCALOOSA? How is that not unfounded hype?

I am counting the days when these controversies will be settled on the field, outside of the jurisdiction of the NCAA. It's coming. It's just a matter of when.