ESPN's Brett McMurphy says that Illinois will be heading west due to realignment.

Share All sharing options for: Report: Maryland, Rutgers In Leaders, Illinois To Legends

Penn State will be making less trips to Champaign, according to ESPN's conference expansion guru Brett McMurphy, as Illinois will be moving to the Legends Division when Maryland and Rutgers make their way into the Big Ten come 2014 (Rutgers is supposed to have a 27-month exit period which would keep them from moving until 2015, but sources say they hope to move a year earlier).

So how will the new set-up look? Pictures! 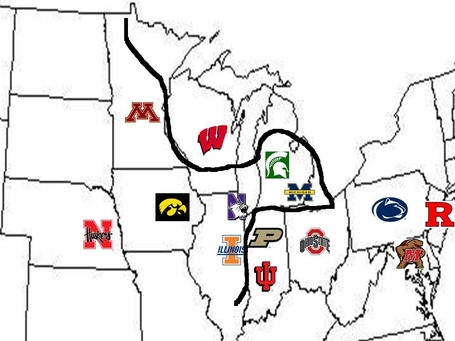 As you can see, Wisconsin is still left isolated in the west, probably due to Jim Delany's reluctance to give up the whole Legends-Leaders buzzword division names, but also to keep competitive balance somewhat even, especially considering what could happen in the next four years of Penn State football.

The biggest question with this new set-up is how protected cross-division games will work. Penn State-Nebraska and Ohio State-Michigan will surely stay intact, but what do you do with the rest of the conference? Maryland-Minnesota? Rutgers-Northwestern?

I can see it now: "Old tradition meets new tradition -- The Big Ten Conference" or some other half-baked advertising idea the B1G PR department comes up with.

What are you thoughts on the new alignment? Should they have gone geographically? Does this setup keep Penn State competitive through the sanctions? Let us know.

Maryland, Rutgers to join the Big Ten in 2014