A recap of this weekend's wrestling action.

Nico Megaludis started the season like he ended last year's season: on fire. He had the Tech Fall in just over 5 minutes and a pin in just about the same time. Nico did what you would expect a national finalists to do--dominate lesser unranked opponents. He's going to be tough to beat this season by anyone not named Matt McDonough.

David Taylor: yawn. Two matches, two Tech Falls. Wash. Rinse. Repeat. Quentin Wright is still going for the big throws early before going to the leg work. I understand it but I wish he'd rely on his low shots more. Q has a great low single and his lanky stature gives him an advantage because of his reach. He was able to catch Vizcarrando of West Virginia but the better wrestlers will keep their distance from Wright. 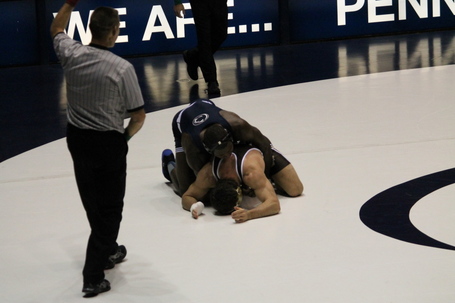 Hamlin wrestled despite a injured hand

Easily the most entertaining match of the weekend was that of Ruth and Hamlin. When Hamlin took the mat, he had his right thumb completely wrapped; I can tell you with a lot of certainty that it's nearly impossible to wrestle anybody without your right hand, but you're really behind the eight ball if you have to wrestle Ruth in that condition--without the grip of your thumb, you lose a lot of your offense. I have to give Hamlin a lot of credit; though Ruth jumped out with a couple quick takedowns, Hamlin battled back and made it a close match. These two are going to meet again before the season's over, I'm pretty certain of it.

Welcome to the show 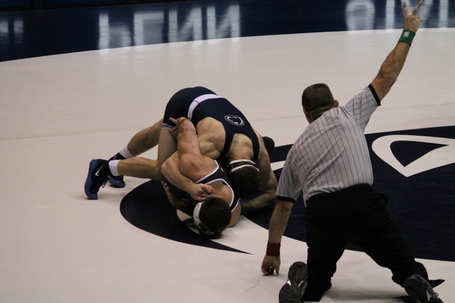 Oh, Hello there, Matt Brown, welcome to the regular starting lineup. You just go out there and major the 18th ranked guy and get a pin. Isn't being part of the lineup fun? It is for us.

Welcome back to wrestling, Jimmy Lawson, wrestling missed you. Thanks for the major decision, you may have taken a step closer to the full-time starting job.

Bryan Pearsall had a strong weekend including an upset win over #19 Nathan Pennesi of WVU. I expect big things from Bryan this year; we've seen steady improvement from the senior. Jordan Conaway and Nate Morgan both wrestled at 133 with mixed results. It looks like the coaches are still trying to figure things out at that weight. 133 is clearly going to be Penn State's weakest weight class this season.

No Andrew Alton, no problem. James English stepped in got a major and upset the 18th-ranked wrestler against Lehigh. It may be time for other schools to start worrying, when Penn State's backups are beating ranked wrestlers. English just can't find a spot in this lineup. 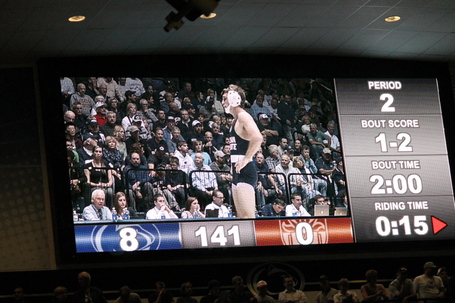 I snapped a quick shot of the new format of the scoreboards at either end of Rec Hall. This year they have live video while the matches are going on and replays during stoppages. I have to say that I like it very much (especially the replay) but the Bout Score needs some color coding so you can easily pick up which score belongs to which wrestler. Granted, it didn't take me long to figure out Penn State is always on the left but it's a bit confusing at first. I like it though.

The rich get richer. Penn State picked up four outstanding recruits lately, here's a quick look at their resumes.

The Kiski Area star and 2012 PIAA State Champion at 182, he’s compiled a (121-12) career record including three trips to Hershey in Class AAA. McCutcheon is ranked as the #7 recruit in PA for the entire class of 2013 and is projected at 184 lbs.

Last season’s PIAA wrestling champ at 145 pounds, the Chambersburg native comes to Penn State ranked as the No. 58 recruit nationwide. He chose the Nittany Lions over Maryland, Northwestern and Drexel.

the Solanco heavyweight decided to wrestle for Penn State, not next year but in two years. The junior is considered among the top high school wrestlers in the country. He won the state 215-pound class championship as a freshman, and the 220-pound title last year as a sophomore. He has a career record of 94-4, including a current 48-match winning streak. He also considered Ohio, Maryland and Cornell.