The team will honor Michael Mauti by having "42" painted on the side of their helmets for today's Senior Day game.

Share All sharing options for: "42" To Adorn Penn State Helmets In Today's Game

The picture from above shows the helmets that Penn State will be wearing today, now with the addition of "42" on either side to honor Michael Mauti, who suffered a season-ending knee injury last week.

My thoughts: This is a nice gesture and all, but it's not like Mike died. I love him, you love him, we all love him, but this is over the top. Plus, it's the complete opposite of the whole #OneTeam campaign that everyone has decided to get around this year, singling out one player after it was the whole team that allowed Penn State to move on. 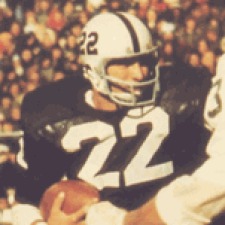 With that being said, it does look good and it reminded me of footage from the old days, John Cappelletti, especially. If they wanted to make it a staple for next year for all the players, I wouldn't really be against that. It isn't like putting names on the back of the jerseys since this has been a part of the past.

What do you think? Let us know in the comments.