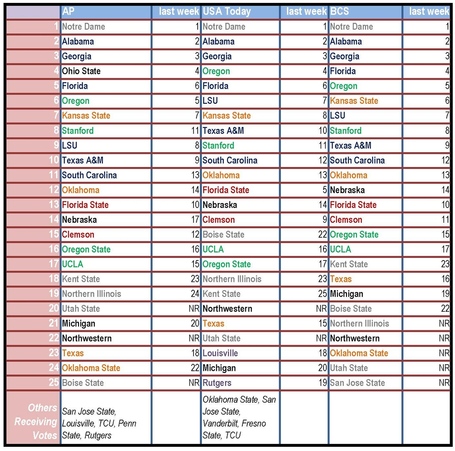 Not much change at or near the top this week, as the winner of the SEC championship game will face the Irish for the MNC.

The biggest falls this week come courtesy of the Big East (I tried to fix a less-than-flattering moniker on that label, but at this point it just seems petty and unnecessary what with their lack of being a viable conference and all). Both Louisville and Rutgers dropped out of the AP and BCS polls (both are near the bottom of the Coaches' rankings), leaving the most questionable BCS conference without a representative in the rankings. Never fear, though--they'll still get one of the big bowl games!

Meanwhile, over in MACville, Kent State is poised to be a BCS buster. Yep, you heard that right; if they beat Northern Illinois in the championship game this week, in all likelihood they'll end up in the best bowl a team from that conference has ever seen. Way to go, fighting Jareds!

And, oh yeah, PSU is technically #29 in the AP--so if a few more teams in front fall, they could finish the season ranked. Weirder things than this have been known to happen.