Overall, it's hard to complain about a 42-3 win but if you are going to pick nits Pearsall had a bad day and Andrew Alton tends to still be a all-or-nothing style of wrestler. More on that in the individual breakdowns but suffice it to say, Penn State wrestled a good match. They ended with 4 pins, a tech fall and a major decision. Also, there was this at the break. 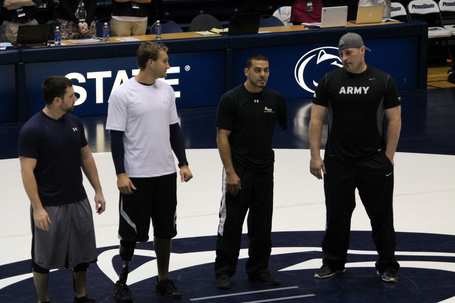 Those are four Army soldiers that all received the Purple Heart award for sustaining injury in the line of duty. They were honored for Military Appreciation Day which is also why Penn State was wearing the awesome digital camo singlets. The two on the outside fully recovered from their injuries, unfortunately the two in the middle had to have limbs amputated (leg and arm). It was a stark reminder that there are incredibly brave men and women who throw themselves in the line of danger every day to defend us. We all should be thankful. 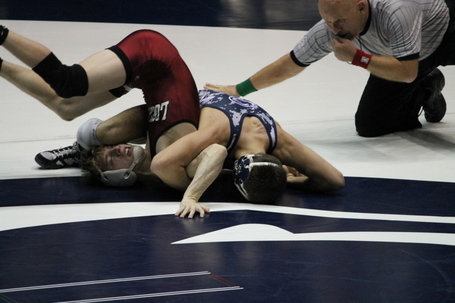 Nico actually gave up the first takedown early in the first period, but like Cael Sanderson teaches, he quickly escaped and went right back at Rehm to secure his own takedown. After a good ride out to end the period, Nico chose down, escaped, took Rehm down again and rolled him on his back for the pin. 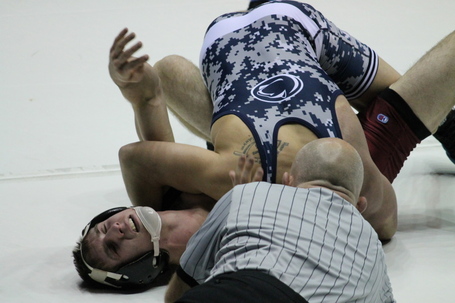 Conaway stayed undefeated in dual meets beating Matt Bryer 13-3. Conaway jumped out to a quick 8-2 lead after one period thanks to some quick takedowns and a couple backpoints. He also built up solid riding time and cruised from that point on. He added a takedown in each of the final two periods and rode Bryer out in the third.

I have to give credit to Dan Neff and the coaching staff of Lock Haven. Neff came out with a plan against Pearsall, executed it well and walked away with LHU's only points. Neff used a 2 on 1 in the neutral position to block off Pearsall and was able to get two takedowns of his own. He chose neutral when it was his decision wrestling away from Pearsall's strength. Because Bryan could not covert any shots into takedowns he was never able to apply the solid ride he has.

Andrew always goes for the pin in the first period but when he doesn't get it, he often ends up in a close match and this was no different. He was able to jump out to a 7-3 lead after the 1st thanks to two takedowns and some backpoints but he ran out of gas in the third. As was the case in his true freshman year, he had trouble getting out from bottom, even getting a stall call against him in the third. He gave up the riding time point but he did get the win. 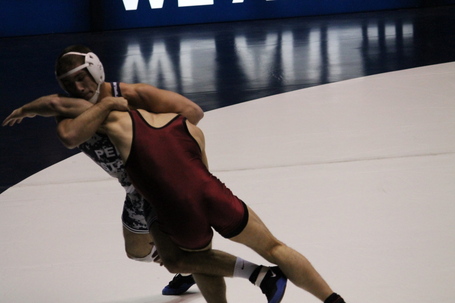 Unlike Andrew, Dylan looked good coming out of the down position. He showed good explosion and got out quickly. The final 5-2 score may look close but you have to remember he was wrestling our good friend and erstwhile Penn Stater Jake Kemerer who can slow down any wrestler. It was good to see Dylan wrestle for 7 solid minutes getting a takedown in the 3rd with just 20 seconds left. He looked tired in previous bouts but not so Saturday. 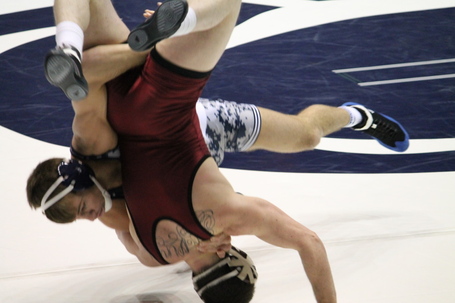 David Taylor understands your laws of gravity, he chooses not to follow them however (Photo:BSD/Galen) 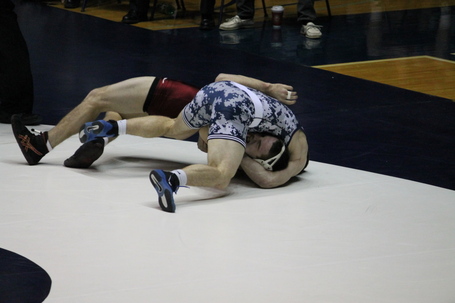 This is going to sound weird considering all of the crazy talent Penn State has but Matt Brown is fast becoming my favorite wrestler. Dude is absolutely relentless and comes after you like you slept with his girlfriend. He shoots and if he doesn't get it, shoots again, and again, and again and... you get the picture. There's no wasted time with Brown, he's constantly in motion in every position. If you happen to make it to the 3rd period you better be in good shape because Brown ramps it up another notch in the 3rd. He's ranked 3rd behind Nick Heflin of Ohio State and Chris Perry of Oklahoma State. Perry's a tough cookie but Brown will beat Heflin Feb. 10th when the Nittany Lions wrestle the Buckeyes. I'll be shocked if he doesn't. 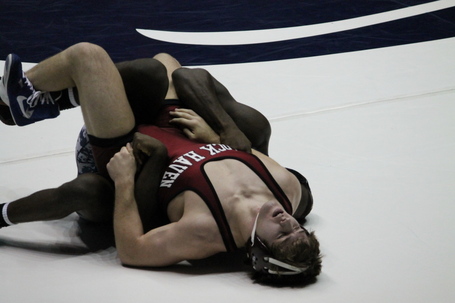 There's no position a man can be in where he feels more helpless than this one (Photo:BSD/Galen)

Ruth built a 9-1 first period lead, rolled Garcia on his back several times and almost ended the match before the 2nd period ended. It took him just under 5 minutes but he did get the technical fall. The amazing thing about Ruth is, even when his opponents get good shots he always finds a way out. Garcia was in deep on Ruth late but somehow Ruth turned it into a takedown of his own. It's Ed Ruth's world, we're all just living in it. 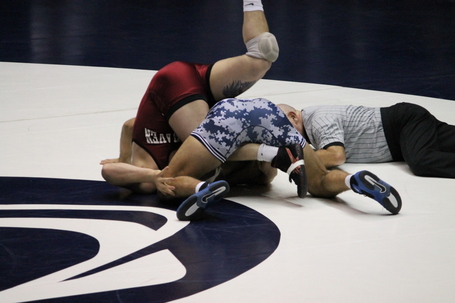 Q did what Q does, he threw Sprenkle to his back early but was unable to finish him off. Sprenkle then stayed away from Quentin resulting in a low scoring bout. When Wright started shooting low good things happened and he was able to catch Sprenkle in the 3rd for the pin. Q loves him some upper body throws.

A lot of the crowd stuck around to get their first glimpse of Jimmy Lawson and he didn't disappoint. It was a rematch of this year's Mat-Town Open which Lawson also won. Jimmy used two takedowns (one off a counter) to secure the 5-1 win. Lawson looked quick for a guy his size and it's going to be tough to keep him off the mat.

-maybe it's just me but the team looked sluggish Saturday. Maybe it was the lack of any ranked wrestlers on Lock Haven or maybe they were looking ahead but they didn't seem to be firing on all cylinders.

-your moment of humor came in the heavyweight match when Sprenkle and Lawson went tumbling off the mat not once, but three times. The first they almost flattened the elementary kids sitting on the gym floor, they then almost destroyed the gray-haired fans on the bottom bleachers in my section; then they almost took out the fans in the reserved seats but by then they had learned their lesson and got out of the way quickly. It's always fun to watch the fear in fan's eyes when 500+ lbs. of wrestler barrel uncontrollably toward them.

- it's fun to see the identical twin brothers ranked identically.

-Welcome back Jake Kemerer, we do not miss you and your 30 fake shots and 1 actual shot per match. Seriously, you have to actually have the threat of a shot before a fake shot gets you anything.