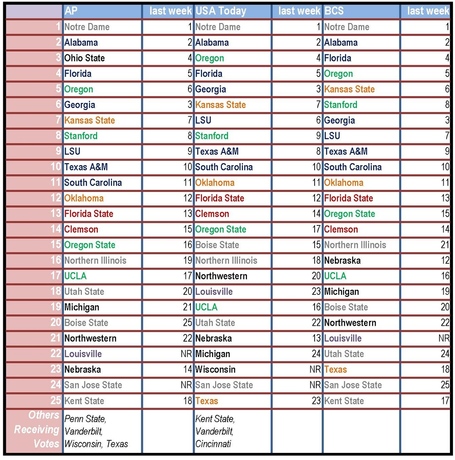 We'll have a roundup of where all the bowl teams are headed later this week, but for now let's take a look at the final regular season polls.

As Dan wrote this afternoon, Penn State is essentially number 26 in the AP poll, far and away the top team "also receiving votes". What does this mean? If a few of the teams ahead of us lose in the bowls (not an unlikely proposition), the Nittany Lions could finish the season ranked in the AP--something they didn't even accomplish in 2011.

The kicker in this poll this week, to me, is Wisconsin. The USA Today Coaches' Poll has Wisconsin #23--really? A five-loss team deserves to be ranked ahead of a two-loss team that just lost to the #16 team? I get that they blew out the Cornhuskers, really, I do. But they also lost to them earlier in the season, and lost to Michigan State and a Penn State team that's unranked (their losses to Oregon State, Ohio State, and Michigan are more excusable, but add onto the L column regardless). That's just inexcusable to me, and by the coaches nonetheless--who still have Nebraska (the team that the Badgers just absolutely dismantled) placed two spots ABOVE Wisconsin.

Can I just say that, more and more, the rankings system is a sham to me? It's all subjective, and it's all about names. If Wisconsin was Northwestern and won the Big Ten with five losses, do you really think they'd be ranked? Of course not, because the idea is simply laughable. And so is this. And don't even get me started on OSU not being number two, again. //end rant

On a different note, I get the whole LOLB1G this year. But have you seen the Big Twelve? They're down to just two teams ranked in the AP, and three in the Coaches (with Texas just sneaking in at #25). They may be, top to bottom, worse than the Big Ten--and who would have thought that? We won't, of course, mention the ACC or Big East.

The current rankings/bowl system at work, y'all. It's nothing if not cringeworthy.