BSD Investigates: What is 'Philly Swagger'?

Pat Chambers and D.J. Newbill have brought their Philly Swagger to State College. What, exactly, does that imply?

Share All sharing options for: BSD Investigates: What is 'Philly Swagger'?

Penn State travels to Philadelphia for a showdown with LaSalle at the Palestra tomorrow night (9:15pm, NBC Sports Network). It's a homecoming affair for both head coach Patrick Chambers and sophomore guard D.J. Newbill, who is averaging 15 points, six rebounds and three assists in his new found role as the team's point guard.

What's behind Newbill's success, you ask? You may think it's his skill at penetrating double teams, or his ability to consistently hit a midrange jumper in traffic, or his svelte 6'4" 205lb frame that gives him a physical advantage over most collegiate guards, but no--we here at BSD have boiled it down to one mysterious attribute: "Philly Swagger."

To fully understand "Philly Swagger", we must first dissect the phrase into pieces, so we can examine more closely. First up "Philly." Philly is short for Philadelphia, a city in Pennsylvania first discovered by the Penn State basketball program in the summer of 2011. Its discovery was made possible through Chambers, then the head coach at Boston University, who, upon telling the program of its existence during Penn State's coaching search, was hired under the condition that he would cultivate his knowledge of this new world into a better basketball team (DID YOU KNOW: Penn State's AD at that time was Queen Isabella I of Castille).

Besides being a haven for walrus-y football coaches and a sandwich made with cow and Cheese Whiz, Philadelphia is apparently a bastion of basketball talent known for a distinct style of play. Hoops legends such as Wilt Chamberlain, Kobe Bryant and Marc Jackson all hail from this city, which leads you to wonder--if this place isn't that far from State College, then why weren't former coaches looking for it? The answer to this and many other Penn State hoops queries lie in the second portion of this mysterious phrase.

"Swagger" is a word that should be familiar to the Penn State fan base after Joe Paterno introduced it to offensive lineman Johnnie Troutman, who then relayed the new slang term to the media, who then relayed it to a bunch of rappers for their use in 2009. From there it has taken off, coming full-circle when Chambers used the term to describe Newbill at November's hoops media day:

"D.J. is tough and has swagger. He's going to fight 'til the bitter end. He brings a confidence he shares with the team."

From here, media day slowly evolved into a discussion of the term. Tim Frazier had this to say about his new teammate:

Oh he's got like the "Philly Swagger" in him. He's from Philly, so before I even met him coach told me he had this guy coming in and he's got the "Philly Swagger." I was like, "I don't know what this Philly Swagger is I'm from Texas". When you get to meet him, and you get to see him, he kind of has a chip on his shoulder, he's a hard-nosed player. Like I said he's very competitive and wants to win everything.

Newbill himself had this to say about how he got his Philly Swagger:

"Yeah, you have to earn that. Just playing in the city, all the street leagues, all the little tournaments, all of those things right there help you to develop that Philly Swagger."

There we have it: tough, hard-nosed, confident, and having played streetball in the city with a chip on your shoulder. After watching the first seven games of the season, that seems like a pretty fair label for this scrappy team, from the way Newbill plays to the way Chambers coaches. Case closed. (Note: I still have no idea what it means).

However, this has us thinking--Penn State has had hard-nosed, chip-on-your-shoulder-types before. Are there different kinds of swagger? If so, what kind of swagger did Penn State have before Chambers' arrival, and did that preclude coaches from looking for it in Philadelphia?

Ed DeChellis is undoubtedly a man that possesses some form of swagger. What type of swagger that is exactly, has been unknown--until now. Before the big reveal, we must find out more from our swagger expert, Mr. Newbill:

"I've never heard of a dude coming to Penn State for basketball out of Philly," he said. "I never knew anybody in Philly who was getting recruited by them."

Who, then, was Penn State recruiting? Did they have swagger? This writer would argue that yes, pre-Chambersian Penn State hoopers did have swagger, though it was a swagger completely different than the Philly variety. Rather than attempting to explain this phenomenon in prose, we present to you an image that defines baskEDball, what we have determined to be... 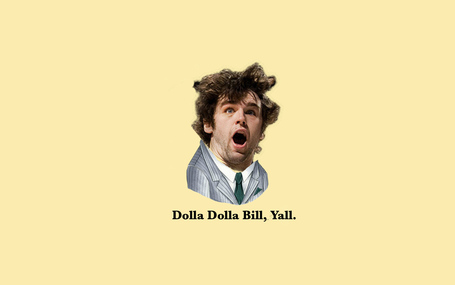 (big ups to Galen for the photoshop job)