A critical mainstay these past few years for the Penn State secondary, Morris' athleticism and senior leadership helped hold the team together during its darkest days, weeks, and months. 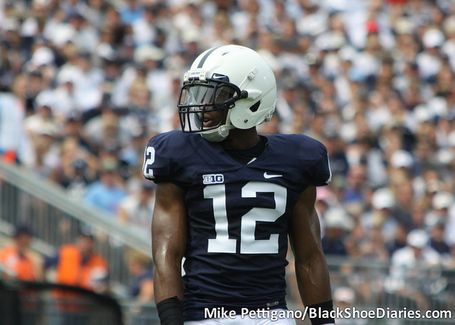 Coming out of Eleanor Roosevelt High School of the Washington, DC Area, Stephon Morris was best known as 'that guy who went to the same high school as Derrick Williams.' He was a short (5'8") but quick and hard-hitting corner who could provide the intangibles that are ever so critical to playing in the secondary.

And critical to the secondary he sure was: Stephon saw playing time in all 13 games of his freshman year, eventually getting the start in place of an injured AJ Wallace in a 42-14 shellacking at Michigan State in the regular season finale. Beginning with his sophomore year, he was a regular starter in the PSU secondary, racking up tackles and playing tight coverage on receivers whom opposing quarterbacks dared throw to in his general direction. This season, he was the leader of a young and depleted secondary that was forced to play a couple of freshmen out of sheer desperation, helping get players such as DaQuan Davis quickly acclimated to the pace of major college football.

Stephon's finest moment however, does not come from his play on the field, but how he stood tall with Michael Mauti, Michael Zordich, Matt McGloin, and numerous other players shortly after Herr Emmert announced the devastating NCAA sanctions and declared his allegiance to PSU, once and for all. Stephon was also the most vocal on Twitter about his disdain for the open-season poaching of PSU players (*cough*BECKMAN*cough*) that occurred shortly after the sanctions were handed down. While Mauti and Zordich get most of the credit for holding the team together, Morris certainly deserves his share, as well. There is no doubt in my mind, if he were the same age the current 'Supa Six' members, he would've been the seventh guy in that crew.

Oddly enough, my fondest memory of Morris still remains to this day the time during his freshman year when he came up just 25 yards shy of a coast-to-coast pick-six against Illinois (starts around the 1:00 mark)* I'm not sure why, but perhaps it was because that was the moment I first saw his skills on display (particularly his speed) and thought to myself that this kid was going to be something special when it was all said and done.

Take a bow, Stephon. You've more than earned it. And on behalf of the entire BSD community, thank you.

*Even if Stephon had reached the end zone, the TD wouldn't have counted because of a holding penalty against PSU