Billy Oliver Calls It A Career

Share All sharing options for: Billy Oliver Calls It A Career

This was inevitable, but it doesn't make it any less sad. Once it was reported Oliver got sick during the Minnesota game and his concussion symptoms had returned, it only seemed like a matter of time before Dolla Billz hung em up. I honestly was surprised he came back the last two games against MSU and Iowa, but Billy made it official after the Nebraska game yesterday.

I'm sure there are plenty of fans who are probably excited about this news for all the wrong reasons. They probably think this frees up a scholarship for Chambers to use to build for the future even though it really doesn't. They also are probably happy that the 'worst basketball player ever' (yes, I heard this statement while in the student section yesterday) will no longer don the Blue and White.

These narrow-minded individuals are the fans who believe scoring points is the sole indicator of basketball ability. Yes, Billy Oliver struggled in this capacity for Penn State. Despite being a great shooter in high school and having picture-perfect form, he will leave with just 45 threes at 30.9% clip in 58 games. There's no doubt his woes were frustrating for everyone, especially since his jumper was essentially his only offensive weapon.

Hopefully many others will remember and appreciate Dolla Billz as the ultimate, selfless teammate. The man who was always making the right rotations on defense and took the most charges. The man who drew praise and admiration from two coaching regimes and more talented players. He is a perfect representative as a Penn State student-athlete, and you can clearly see the impact he had in the lockerroom after hearing the reaction from his teammates and coach.

It's a shame we were never able to see a free-minded Billy Oliver. Only he can tell you how much of a hindrance his concussion history has had on his college career, but there's no doubt it had some effect. I've seen Jamelle Cornley look me in the eye and say Billy Oliver was going to be a player. So has basically everyone involved with the program since Billy joined in the fall of 2008. Unfortunately, we were left with more moments like these instead of this.

Undoubtedly this is the right decision for Billy's health, but you hate to see a hard-working kid get the short end of the stick. He's had to deal with these issues his entire career without getting answers from any doctors. It seemed like just when he thought he was over it, the headaches came back to haunt him. He kept trying to overcome the obstacle and contribute to the program as its captain, but in true Oliver fashion, he selflessly retired because he's not able to give 100%, and that's unfair to his teammates.

Billy will get a medical scholarship for next year and stick around in a graduate-assistant type role. He'll be able to finish his two degrees in Finance and Economics, while helping out any way he can.

We wish Billy well in his future endeavors and thank him for his relentless effort. He will be missed. Contrary to an all-too-popular opinion, he was far from worthless in this program.

Now the scholarship situation has changed yet again. Here's the updated table: 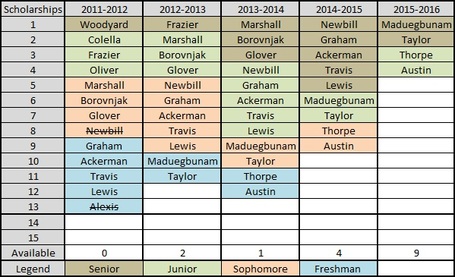 This doesn't open a 2013 scholarship, so it doesn't allow Chambers to recruit another high schooler. It only offers a one-year scholarship opening for next season. This will likely be offered to Nick Colella, who likely has earned it in Chambers' eyes. Colella is in his 4th year, but redshirted last season, so he has one year of eligibility remaining. I didn't think he would return if he had to pay, but this significantly increases the chances he'll be on the roster next season. Chambers could also explore graduate-transfers, who could also fill one year scholarships and not have to sit out a year. With Colella's contributions this season, I just don't think Chambers will feel the need to entertain that option unless he already has a connection to a potential transfer.