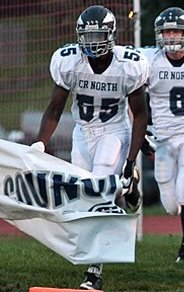 (Another recruiting interview? Well, it's a slow week and a busy recruiting weekend is days away. We're not done yet. JJ)

Penn State fans have become spoiled with the play of the defensive end position. While the ends have certainly been serviceable the last three seasons, it’s safe to say we all miss the days of having someone that set up camp in the opponent’s backfield.

This Saturday Penn State will host Council Rock North’s (PA) Curtis Cothran, who hopes to follow in the footsteps of many Nittany Lion defensive ends that have terrorized the rest of the Big Ten. Junior Day will be Cothran’s first visit to Penn State, though Cothran grew up with Penn State and Miami as his favorite teams.

Visiting different schools has been the biggest perk of the recruiting process thus far for Cothran. "I haven’t traveled very much. When I take my visits to schools it’s my first time getting the opportunity to check out the cities and campuses. It’s been fun."

Cothran has been highly recruited, sitting on offers from Penn State, UCONN, Rutgers, Maryland, and Virgina. He visited Maryland the first weekend of February and took in a game at Rutgers towards the end of the season. Former Penn Stater Greg Schiano made a big impression on Cothran and his family before abruptly leaving to accept the Tampa Bay job. Obviously, things have cooled with Rutgers since Schiano’s departure.

"I thought Rutgers was a great program. I was really impressed with Coach Schiano. My dad really loved him. I was really surprised when it happened. I haven’t heard anything from the new staff so I’m not really sure where I stand with them."

Cothran also plays right tackle on offense, but has been recruited solely as a defensive end. This is more than fine with Cothran.

"Defensive end is my preferred position. It’s just fun to stop people from scoring. It’s a great feeling coming off the field knowing that you did your job."

Like most people in the Penn State community, Cothran’s feelings about Penn State have been mixed during the last few months.

"I was really upset about all the news that came out in November. I didn’t know what to think when Paterno was fired, either. But I think Coach Paterno really worked to build a great organization, and I think it will stay that way."

Although Cothran has been a lifelong Penn State fan, his favorite defensive end has always been Julius Peppers. It’s nearly certain most Nittany Lions will give him a pass if he can emulate Peppers’ game in the blue and white.

(It's not much, but it's the extent of the available video on Cothran. For now.)