It’s rare to speak with a 17 year-old as eloquent and insightful as Brookfield, Connecticut quarterback Boeing Brown. It’s even rarer to find someone with his character who can also easily pick apart opposing defenses with pinpoint accuracy. This combination held by high integrity student-athletes has long-given Penn State fans a great source of pride. Brown would fit in nicely with the next generation of players seeking to continue the long legacy of "The Grand Experiment."

While he has yet to receive any official offers, he has garnered interest from plenty of top programs and has been informed by coaches he will be getting some big news soon. In addition to Penn State, he has visited and received high interest from South Carolina (which his father has reportedly said is Boeing’s top choice) and Auburn. He has also been invited to visit for Junior Days at Vanderbilt, Florida, Michigan State, Nebraska, NC State, and Illinois, among others.

While the 6-4, 220 pound Brown has the frame of a prototypical drop back quarterback, he isn’t afraid to tuck the ball and run when needed.

"I am a pro-style quarterback and love to pass, but have learned for success and survival I need to run and get that first down or making something happen. Quarterbacks are looked at to be a good leader, to so extend plays, make good players great, and become better with each effort."

Brown was previously recruited by Jay Paterno and Mike McQueary, but now speaks with tight ends coach John Strollo on a regular basis. He will meeting Bill O’Brien for the first time this weekend at Junior Day, and is excited for the opportunity.

"I like the offense Coach O’Brien runs, I would be an ideal fit as I have grown up playing the same scheme and it works for me."

Brown was set to visit Penn State for the first time for the Illinois game earlier this season, but an unseasonable snowstorm forced him to turn around. Without any indication of what he was getting into, he rescheduled to attend the Nebraska game. 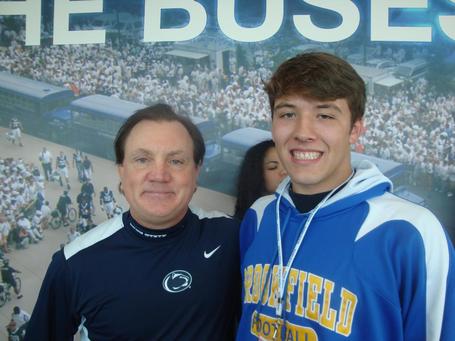 Despite the unprecedented chaos surrounding the Penn State campus, Brown made the decision to stick to his word and attend the game.

"Rolling into the valley and seeing it in that morning sunlight, Beaver Stadium rising larger than life and able to see from miles away, it reminded me of what it must be like to travel into Rome and see the Coliseum. It was all so impressive and euphoric, I could not believe it."

Brown did not regret his decision, and came away impressed with the character of the players, coaches and fans on such a difficult day.

"Being there was a great experience. Seeing the buses and team arrive, with the front seat empty for Coach Paterno and then the starting quarterback step off with thousands of fans all cheering and chanting "We are…Penn State" raised the hair on my neck. It was very emotional. Then walking out on the field, seeing at pregame some 15,000 students already in seats cheering, singing, and chanting for Joe Paterno and the team was amazing. When we took our seats in a crowd of nearly 100,000 strong, I was moved to tears along with my family as the Nebraska coach called both teams to the middle of the field and shared a compelling prayer. I've never seen anything like that."

The deeply religious Brown has shared many prayers on his Facebook page during the past few months for the alleged victims, as well as for Joe Paterno and family as he eventually lost his battle with lung cancer.
It comes across pretty clearly that Brown is a student of the game who is always looking for ways to elevate his game.

"My favorite is to drop back or go from shotgun with a great deep post and then under routes so I can do a pre-snap read to a drop back read. The most successful plays tend to be a solid roll out and overload with a high-medium-low flooded zone, one of my favorite plays. I find quarterback development demands constant work, from footwork and mechanics, passing consistency to understanding in quick time how to read and defeat a defense that is always changing and evolving."

Brown has an unselfish philosophy when it comes to the recruiting process that will benefit him in selecting a school, as well as other prospects throughout the nation.

"I ask myself, If I did not have football, would I want to be at that particular school? If it is no, than I don't want to just bother the coaches under false pretences and hold an offer that they could give to another player who wants to be there. I see too many schools giving offers to one recruit and he collects them like a boyscout earning badges, but to me there are others who really want that offer and to be there, I hope that matters."