This Is Penn State: Making an Impact With THON

Share All sharing options for: This Is Penn State: Making an Impact With THON

There was an extra bit of electricity in the air around on campus on Friday, October 27. The students were buzzing about the continuation of the football team's improbable run toward a Big Ten title the next day against Illinois, an even more improbable major fall snowstorm that was on the way, and all the excitement that comes during Halloween weekend on a college campus. However, while many of their peers were making beer runs and putting the final touches on their costumes, Karisa Maxwell and Troy Stram were preparing for a bake sale. The duo would stand in the cold rain for eight hours and sell items to passers-by in downtown State College to help raise money for THON.

Two undergraduates sacrificing a Friday night doesn't even begin to tell the story of THON. It is the story of an entire community coming together for the greater good, standing on the shoulders of those that came before them.

The Penn State student body raised $9,563,016.09 at the 2011 THON to help fight pediatric cancer. THON has raised a whopping $78 million since its inception in 1973, when the pioneering 39 dance couples raised $2,000. Beginning today, 708 Penn State students will dance for 46 consecutive hours to try to make THON surpass the $10 million milestone for the first time. While these dancers use every ounce of energy to dance for nearly two consecutive days without a break, a cast of thousands do their part to make THON the largest student-run philanthropy in the world.

Becoming a THON dancer doesn't just involve signing up and making yourself available for the weekend. It is a year-long commitment to raising funds and awareness. It practically becomes part of your daily routine.

Maxwell and Stram earned their spot as independent dancers through a lottery system. Potential dancers need to raise a minimum of $2,600 to be entered in the lottery, and receive additional lottery entry for each $500 they raise. The duo had merited 15 entries by the time the lottery came around, meaning that two individuals that had to dig through their couch cushions to go to Wings Over found a way to raise more than $10,000.

“There are no words to describe how excited and relieved we were when we got the email saying we had been selected. For us it was a dream come true,” Maxwell , a junior broadcast journalism from Otisville, New York, said.

One of the more entertaining parts of the THON weekend is a dance-off competition between all the athletic teams. This year, the football team will be looking to win their third consecutive title under the tutelage of junior cornerback Mike Wallace. Wallace has put many hours into organizing the dance-off between choreographing the dance, instructing the other players, and even arranging the music for the routine. However, his biggest role is to motivate others to devote themselves to THON as well. Wallace’s hip-hop group Primary Element even wrote a song for last year's THON, entitled For the Kids.

“Above all else, my biggest responsibility is to give the players an understanding of why they are dancing and what THON is all about,” Wallace said. Since the team is so large, the football team’s THON dance-off performers are comprised of the freshman. Just like anxiously waiting to exit the Beaver Stadium tunnel each fall Saturday, the group is focused and determined to bring home another victory.

“You can expect high energy, sharp dance moves, awesome stunts, and a special surprise somewhere in the middle,” Wallace said through a large grin.

While the football team has high expectations for this year's dance-off, historically this was not always the case. The team was never even competitive against the other intercollegiate teams at THON, let alone come close to winning. This earned them a reputation for not taking the event seriously. Everything changed in 2010 when members of the football staff reached out to Lionette Dance Team Captain JoAnn Espositio. Esposito had worked with the hockey team the previous year and helped them win the competition. The right people knew that she was capable of reversing the fortunes for the football team.

Before Esposito started teaching the players how to dance, she knew that they first needed the proper motivation.

“The first day I sat down and explained very thoroughly what THON was, explained the families, and showed them many videos to help them understand how truly amazing this was,” Espositio said. “It's not that the football players didn't care, it was just that they never really understood THON was and why they were doing the dance.”

“I felt like there was a lack of effort, time and energy put into the dance, in part because we were not properly educated in the meaning of THON. My freshman year JoAnn made sure we knew how big a deal this was, and with our competitive spirits made sure we were going to be good,” Wallace added.

Esposito patiently worked with the team for weeks. By the time THON came around, she had whipped them into championship form. The football team finally shook its longstanding negative rep and took home the top prize.

“I still get chills thinking about their performance, because they really put their heart and soul into it. Their excitement, dedication and energy portrayed on stage is something that was contagious, and they had the whole BJC (Bryce Jordan Center) on their feet,” Esposito said. I was so proud of them because it wasn't just about the dance - the players made sure they went to as much that weekend as possible and interacted with as many families as they could.”

“Winning the dance battle my freshman year was momentous not just because we won for the first time in history, but because it will forever be a memory the kids will always remember,” Wallace exclaimed. “That is the motivation to come out every year and perform at our best.” 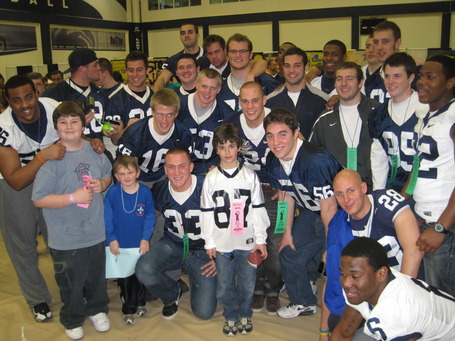 Even though Esposito graduated in 2010, she remains involved with THON. She is advising Wallace and the team on this year's routine and recently organized a fundraiser in New York City, where she works as a marketing coordinator for Madison Square Garden.

Seemingly without exception, the individuals involved with THON receive their motivation from their interactions with the children who are undergoing treatment for cancer. Most dancers are paired with families of a child that has been diagnosed with cancer. The children and their families then get to spend time at THON with their dancers, allowing them the rare opportunity to avoid the difficult conditions that come with living with cancer.

“Witnessing firsthand survival stories and knowing that you helped contribute the money that went directly toward saving a child's life is a feeling unlike any other,” Stram, a senior criminal justice and political science major, said. “This weekend gives them a chance to escape the harsh reality of being a cancer patient and gives them the chance to just be a kid and have fun.”

Maxwell and Stram eagerly anticipate meeting their adopted family, who will be experiencing THON for the first time. 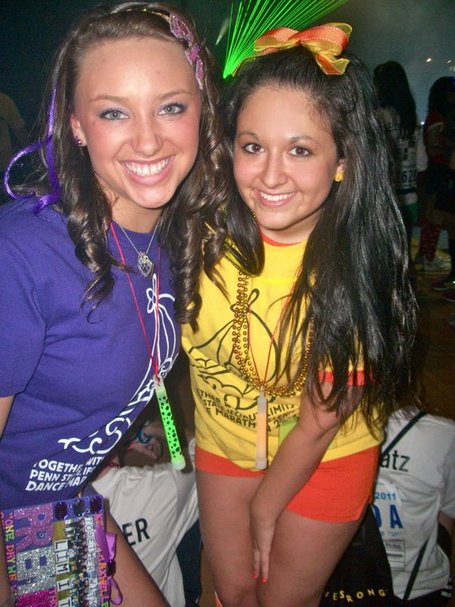 “We have a beautiful THON child named Ellen who is 11 years-old and was diagnosed with cancer in May,” Maxwell said excitedly. “We are ecstatic to meet her and have her by our side this weekend.”

“The most rewarding part of being involved with THON is being able to help these innocent children have hope, smile, and feel as though their troubles are taken away...even if it is just for that weekend,” THON dancer Brandee Shiflett, a senior elementary education major from Baltimore, said.

Wallace, a 2010 Academic All-Big Ten honoree, certainly agrees about his source of inspiration.

“I had no idea about THON when I first got here, and by getting involved and getting to know some of the kids I have seen how powerful and life changing it is,” the telecommunications major and cousin of former Penn State linebacker Terry Killens said.

A surprising fact for most outsiders is that THON is completely run by student volunteers. There are no staff members devoted to THON, and the roles and responsibilities change hands to different students each year.

“THON is a success because of the passions each volunteer puts into it,” Maxwell said. 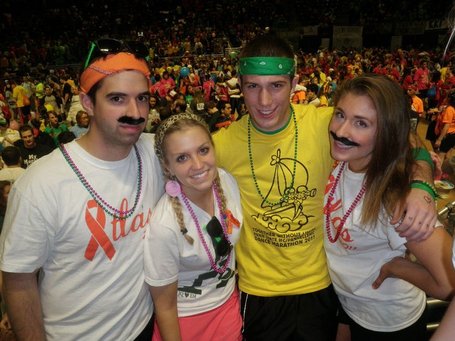 Equally amazing is that the dancers do not take any breaks during the 46 hour event. They dance the entire duration. No sitting, no sleeping.

Another source of inspiration for the dancers is working with the Paterno family, who has been heavily involved with THON for years. Jay and Scott have been tweeting about THON nearly endlessly, and have hosted fund-raising events for THON. Last week Sue spoke at a pre-THON pep rally, where she was serenaded by a loud and enthusiastic “SUE-PA-TER-NO” chant by everyone in attendance.

“I hope that the Paterno family comes to THON and speaks because I know as a dancer, hearing their insightful and powerful words will be enough inspiration to get through the weekend,” Maxwell exclaimed.

The ability to dance for 46 consecutive hours without sleep certainly comes with youth. However, the ability to do your part to help someday live in a world where no child suffers from this terrible disease is something we are all capable of.