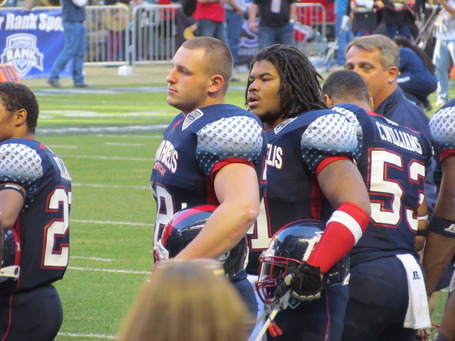 We're using the interminable off-season to take a closer look at the recruits who stood by Penn State in the face of, well, everything that happened since early November. Today, it's Brian Gaia's turn. He chose Penn State very early in the recruiting process (if you haven't noticed, we're running these profiles in the order they selected PSU):

Gaia’s first visit to Penn State came during the Nittany Lions’ 28-22 loss to Michigan State on Nov. 27. Despite the loss, Gaia said he was blown away by a packed Beaver Stadium. A return trip to State College for a spring practice gave him a more up-close look at the program.

"It was kind of cool to see Coach [Joe] Paterno in action," Gaia said. "He was a really fun guy. We had a little talk. He’s a real down-to-earth guy."

Gaia, who’s interested in studying either business or sports management, said Penn State’s academics and the Big Ten’s reputation for putting linemen in the NFL were two more factors that put the Nittany Lions "out front" for most of his recruitment.

"My family, coaches, teammates thought it was the best pick," Gaia said. "That weighed on me more than anything. It came down to an opportunity and it was the best decision for me."

Gaia gets an excellent push and keeps his pad level low while pushing blockers back with leg strength. He disengages from the blocker and locates the ball carrier to make a tackle. His strength and low center of gravity make him a run-stopper in the middle of a defense who can take on double teams and allow linebackers to make plenty of tackles. Gaia needs to improve his sideline-to-sideline speed and ability to pursue from behind. --Brian Dohn

ESPN ranked Gaia as the #13 offensive guard in the nation, noting that Gaia's "size and athleticism are better suited for the offensive guard position at the major level of competition; his frame appears capable of handling additional body mass over time." Tom Lemming complimented Gaia's versatility in selecting him for the Semper Fi and International Bowl all-star squads:

"He's super strong," Lemming said. "He's 100 percent on every play, offense or defense. His versatility was a big reason why I selected him. He can play on either side of the ball where a lot of kids either can't or they don't want to. Brian's a guy who could play offensive tackle, offensive guard, defensive tackle. He can do it all. His versatility is unique."

Gaia's versatility isn't limited to football, either. He was an excellent high school wrestler, making it to the state finals in the heavyweight division.

In late January, Gaia revealed one rather interesting bit of information regarding possible early playing time:

"They said one of the three [defensive] tackles in this class are going to have to play a little as true freshmen, so that opens up the competition between all of us. I'd really like to play as a true freshmen, but even if I did get redshirted or something like that, it would give me a year to get bigger and get used to college both academically and athletics-wise."

Finally, as we could ask of all Penn State's 2012 commits, how did the scandal affect his ultimate decision? His father Tim explains:

"We had a Plan B," Tim Gaia said, "and we were ready to pull the trigger on it, but we waited. We supported Brian. He had his reservations, and rightfully so, but he was still committed and we supported him. Is it going to be an easy road from here? I think there will be some bumps in the road. The coaches on [O'Brien's] staff that he kept and the new coaches he brought in that were in the NFL and college have unbelievable resumes. That made me feel comfortable."

About a week after the scandal broke, Brian Gaia heard from defensive line coach Larry Johnson Sr., who had recruited him. One of the keys to Gaia staying with the Nittany Lions, he said, was Johnson staying on as part of O'Brien's staff.