The Penn State wrestling team finished the dual meet season strong, winning 8 of 10 bouts and beating Pitt by a 33-6 score. Frank Martellotti and Morgan McIntosh were the only losses on the afternoon and both were by slim 1-point margins and both had shots at pulling out the upset but couldn't finish. Penn State got 9 bonus points off of two pins and three major decisions and won the takedown battle by a 22-5 edge. Frank Molinaro and Cameron Wade ended their Penn State dual meet careers on a positive note, each getting a win in front of the home crowd. Molinaro outlasted Pitt’s Tyler Nauman, the 12th ranked wrestler in the country 5-2 and Wade pinned freshman Joel Yahner in just under 4 minutes.

Bill O’Brian was making his rounds this weekend and stopped by Sunday to catch the wrestling match. He made a short, inspired speech at the intermission and returned to his seat (which was one of the best seats in the house – must be nice to be the king). Nothing special, but made me want to put on the pads and play for him. 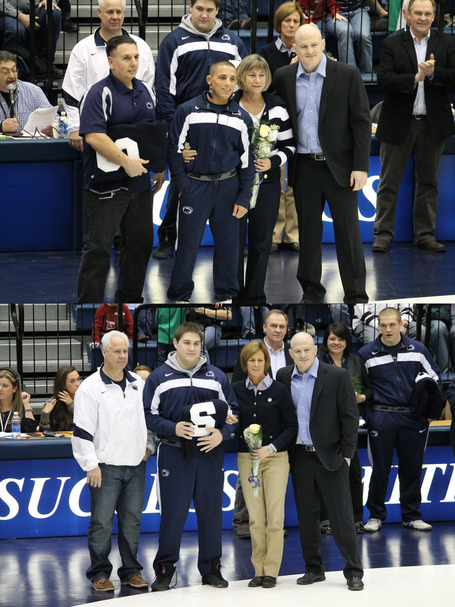 Frank Molinaro came out slow in the first period and gave up the bout’s first takedown, but a quick Molinaro escape and takedown gave Frank a 4-2 lead going into the final period. Amazingly, Nauman chose down to start the third period and was promptly ground into a fine powder the rest of the period for a Molinaro 5-2 win with the riding time point. Why wrestlers think they can get out from bottom against Frank is beyond me, Nauman didn’t give himself a chance by choosing bottom.

As I said in the preview, the home crowd was looking for a pin from Cameron and he didn’t disappoint. The senior got two takedowns and turned Yahner for the pin early in the second period. Cam is wrestling better than I’ve ever seen him in his Penn State career and is poised to make some real damage in the tournament especially with news this weekend that 2ndranked Gelogaev of Oklahoma State is out for the season.

Bryan Pearsall pulled out the match of the day pinning Travis Shaffer with only 3 seconds left. Pearsall got behind 6-0 and gave up a mountain of riding time (4:33) but never gave up. Late in the third, Pearsall countered a shot and got a takedown. Bryan worked hard on top, got a stall point, and desperately worked for a pinning combination. With just 8 seconds left Pearsall hooked up the cradle, turned Shaffer to his back, and got the pin as time was running out. It’s the kind of effort that Penn State fans have come to expect from Pearsall, he came out a little flat, but never gave up.

The other match-up of ranked wrestlers was Nico Megaludis (8th) and Anthony Zanetta (15th) of Pitt. Zanetta wrestled defensively the entire match and sent the bout into sudden victory overtime with a 1-1 tie. Megaludis had several shots in the first SV period but couldn’t finish. With 15 seconds left in the 2nd sudden victory overtime period, Nico got in deep and made the shot count.

Quentin Wright and David Taylor each coasted to major decisions. Taylor could not turn Wilps to get the needed backpoints for the technical fall but still got the major. I had to laugh, several people were commenting that they were disappointed that David didn’t get the tech fall. It goes to show how high the bar has been set by Taylor when fans are "disappointed" in a 20-9 major decision.

Ed Ruth was held out due to a minor injury so Matt Brown stepped in and the Lions didn’t miss a beat. Brown carved up Ethan Headlee, who was a three-time NCAA qualifier, 12-2. Penn State really needs to find a spot in the lineup for Brown next season.

Morgan McIntosh lost to the 4thranked wrestler in the country by a 4-3 score but was close on several occasions. Late in the third, McIntosh got in deep on a single but could not finish as Wilps forced a stalemate with 9 seconds left and held on for the victory. Morgan is very close to the top wrestlers at 197, he just needs to finish his shots. He’s equal on his feet and can go toe to toe with just about anyone in the country.

It was a good win for Penn State as they finish the dual meet season 13-1. With the exception of Frank Martellotti, every wrestler is pretty much where you would want them to be heading into the post season. Wright, Molinaro, Taylor, and especially Wade are all at the top of their game right now, peaking at tournament time. Once Ed Ruth gets back from his injury he should breeze through the Big Ten’s. How can I be so confident? Ruth hasn’t been taken down once this season. He’s amassed 38 takedowns while giving up 0 in duals. That’s a man on a mission. Penn State now gets a week off to prepare to defend their Big Ten championship March 3-4 in West Lafayette at Purdue University.