The third commitment for Black Shoe Diaries in about two weeks, Cari Greene comes to BSD from the nation's capital and will be helping out with our recruiting coverage, though you can expect to see her in many other capacities. Another recruiting team member? Yes, we're hitting this new coverage hard.

What sets our newest commitment apart isn't the hometown (we've already got at least three writers from Larry Johnson territory) or the school affiliation (Penn State, natch). What sets Cari apart, if you haven't already figured it out, is that she is the first ever* female author at Black Shoe Diaries. We're excited to have her enthusiasm and writing talent on board. Welcome to Black Shoe Diaries, Cari!

Cari, in her own words, after the jump...

Cari is excited to join BSD as its first female member. She lurked for quite some time before joining the BSD community a little over a year ago, and while she thinks it's about damn time that a member of the fairer sex joins the author ranks here, she's thrilled that it's her that gets to crash through that ceiling. 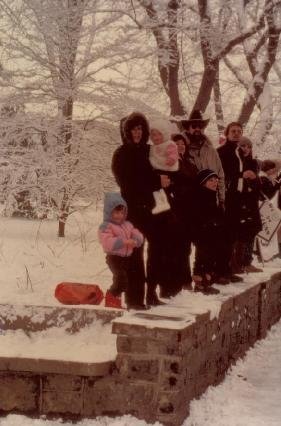 (Cari (in white). January 1983. Downtown State College. The hometown Lions had just played a rather important football game. She was not aware of this. Yet. (PHOTO: BSD/Cari Greene))

A Penn State fan since before birth, Cari is the daughter of two alumni who were students when JoePa began his tenure as head coach. She was "that" kid from pre-K through high school in suburban Maryland, sporting a PSU shirt every day, with an occasionally season-appropriate Starter jacket. She still owns her "Top Ten Reasons Why Penn State IS #1" t-shirt from 1994, and those reasons are still valid to this day. She can't remember the first time she attended a game at the Beav, and was the only one surprised she ended up in State College after high school.

Cari's worst football memory was the Minnesota game in ’99 (she can still feel the tension in the stadium during that field goal her freshman year), and her best was Ohio State in ’05. She somewhat sarcastically blames herself for the dark years, and has become very superstitious during football seasons since as a result.

She graduated from Penn State in ’03 with a degree in film/video, subject material she rarely uses in her current job, working in a non-profit capacity in the DC/Metro area. Where she does use it, however, is kicking ass in trivia in local bars on the weekends.

While not thinking about Penn State football, or her first celebrity crush (Kerry Collins), Cari likes to bake, possibly the only girly thing about her. Her favorite movie of all time is Star Wars, and her favorite book is a toss up between The Godfather and Harry Potter and the Prisoner of Azkaban. She is a self-loathing Redskins fan who literally screamed out loud for joy when they drafted Evan Royster, to the chagrin of everyone at the kids’ birthday party she was attending at the time.

* - Unconfirmed. She's certainly the first female on board since the new regime took over last July.