Catching Up With Class of 2013 CT QB Boeing Brown

Share All sharing options for: Catching Up With Class of 2013 CT QB Boeing Brown

On Friday we introduced you to Boeing Brown, a well-spoken quarterback prospect out of Brookfield, Connecticut. Brown was one of several quarterbacks to attend Junior Day this past weekend, and he sat down to share the details of his trip to State College.

1. Did you receive a scholarship offer this weekend? How was the trip with the other quarterbacks that were there?

I did not receive an offer this weekend, however I do feel confident I am still in the mix perhaps in the tier-two group. They had about eight quarterbacks there, with two already holding offers (Ryan Burns and Christian Hackenberg). Tyler Cogswell also was there and seemed very interested.

The key comes down to if Coach O'Brien and his staff decide to go with two recruits or just one for the 2013 class. That was not yet a firm decision, although I have the feeling it will be just one. The tier-one guys have camped there last year. Coach O'Brien has had to review all of us on film only and has yet to see any of us throw or do work in person, so they encouraged us all to make it to their camp. I know I am in a strong place and with hard work, good character and desire an offer is still open and possible.

It was an honor to be there among so many talented guys, some of the best recruits in the country and being a part of that makes me proud of the work I have been doing and continue to do each day to get better. We all have to find our place, I really like Penn State and believe in their mission, plans and history, so time will tell.

The caliber of players I met and know that were there, are all good guys and will do really well, wherever we land.

2. How were the coaches that you met, and what did you discuss with them?

We all were very impressed, the facilities are state-of-the-art, the coaching staff is amazing, like a who's who of NCAA and NFL talented coaches that we all were eager to get to know more and hear about their stories.

Coach O'Brien is very energetic, funny, and eager...a self-proclaimed type-A and you can see from the impressive pedigree of talented coaches this staff will do a great job. What I really liked is how the former staff coaches (Larry Johnson and Ron Vanderlinden) who remained on seem to all be right on board with Coach O'Brien and will continue to bring that great Penn State defense as they always have. They call it "Linebacker U" so I think you will continue to see that in the future.

On the Offense it is clear Coach O'Brien will remain highly involved but he hired Coach Charlie Fisher to be the quarterbacks coach (only two days on staff when we got there, so he still has work to do in transitioning, but asked us all to communicate weekly) and we got to spend a lot of time with him, even sitting together at lunch.

The other offensive and position coaches were equally impressive and passionate. I like Coach Fisher a lot, he is a grounded, down to earth, humble yet intense coach. He has been involved with players like Jay Cutler to the recent highly successful quarterback at the University of Miami-Ohio and I believe he will work great with Coach O'Brien in developing a true Pro-Style quarterback in a Pro-style offense.

I also have been recruited now by Coach John Strollo and we had time together and continue to communicate as allowed. He is supportive and another down to earth person. I would say he speaks quietly and carries a large stick as he knows football and is another great addition to the staff.

Bill Kavanaugh is still there and did a great job all day keeping us on schedule, having each speaker there to visit with us and being sure they knew each recruit, our names and backgrounds.

Coach O'Brien managed to hire a solid strength and conditioning staff from the University of South Carolina and I imagine Coach Spurrier was not happy because these coaches are bringing some really cool ideologies to the building of speed and power through creative, new and dynamic techniques. In addition he hired the Chicago Bears head trainer to the staff and he is really impressive, you can tell they have a plan to keep all the players healthy, working to prevent injuries and work appropriately to get players back to the field as fast and appropriately as possible.

Coach O'Brien addressed us all (about 40-45 kids and all of our families) in the beginning and then at the end, while throughout the day he visited with players one-on-one as well. Again he is a very likable, serious and professional person. I liked him and I could really see myself fitting in well there with this new offensive scheme or plans and the whole program.

The one thing I did not see yet, is where they stand with a team priest or chaplain, but I could tell they are all men of faith and have a humbling conviction and spirituality that sets a fantastic tone as they move into the 2012 season.

3. Did you get to check out THON during the course of the weekend?

We got to hear all about THON and the traditions. It was confusing as to why they said the State was taking away some funding, but that the students were all doing this philanthropy on their own as a tradition, that last year they made around $9 million and this year were targeting over $10 million and made it. The players did a Q&A players panel with us and that was a topic they got excited about. They were all saying how some of the players are not good dancers, but once they did it at THON they loved it and actually won a competition portion of it, so they were all eager to get over to it and participate, it made all of us as recruits excited too.

I like things like that and how it is for such a great cause. I am a team captain for our "Relay for Life" team and we also do other community service efforts helping senior citizens with yard work and fall clean up, helping coach or volunteer with youth sports each year, and a year or two ago, I helped found a chapter of the Fellowship of Christian Athletes at my school.We also have used Facebook now to get kids to add prayers, good words and have a place to check in or meditate.

I think THON is another amazing and unique aspect of the Penn State University. It was funny because someone asked the question, "Who is Penn State's biggest rival?" and the team players all sort of answered together saying "Everyone, each week, each game is a huge game for us." And it is true, if you are Penn State, you are for Penn State, all others are against....It was interesting how so many alumni have graduated and worked hard to come back to work there, it shows a lot of how impressive the school really is overall. I think people were looking for comparisons of Michigan vs Ohio State, etc. But as the players pointed out, the entire Big Ten is a strong, tough conference and it is literally "Any given Saturday."

4. What did you learn about Penn State that you didn't already know?

I knew Penn State had always held a reputation for strong education and graduation rates, but now I understand how and why. They have implemented an amazing support program for the players. Where some schools say "We work to help keep them eligible", Penn State says "We are working to help our players all graduate" and it shows with a high grade point average, overall just under a 3.0 for the team, and more than 40 players made 3.0 or better on honor roll and at least one player has a perfect 4.0.

Football will leave us someday, so with the degree we have something to fall back on, seeing how well they track players academic progress, helping with tutors, computers, study halls, even strict rules about attending class and doing well on exams, there is no slacking on studies just because you play a sport there. I know the parents loved that, but for the caliber of us recruits, we all liked that.

The academic support staff were all so enthusiastic, proud of their work and should be, and all were approachable. One of the players commented that when he did miss a class, the staff knew and he was called before the man...."and you don't want to be called before the man" with a lot of laughs but serious understanding that they take football and academics serious. At the same time, you could tell they have a good time too, this team is truly a family, it made you want to be a part of it! 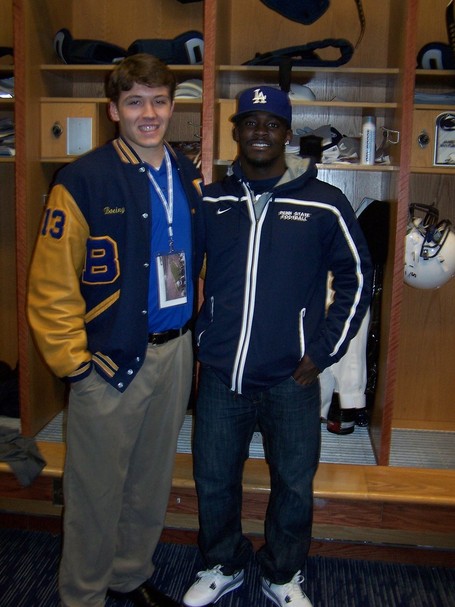 5. What now? Any visits to other schools on the horizon?

I will stay in touch with Penn State and their coaches. I plan to attend their camp and probably the Spring Game. From here I am staying in constant communication with my top schools and making plans to attend several more Junior Days and then camps.

They cannot come visit us until after April 15 so we need to go see them. I am hearing a lot from the University of South Carolina, Michigan State, Auburn, Maryland, NC State, Wake Forest, UCONN, Illinois, Indiana, Wisconsin, Northwestern, Nebraska, Tennessee, Kentucky, Florida, UCF and others. I will be heading to see Maryland this weekend, then to Boston College the next, and then down to see the University of South Carolina, NC State, Auburn University, Florida, Michigan State and then UCF all for Junior Days. I plan for now to go to camp at NC State, the University of South Carolina, Wake Forest, Maryland, Penn State, Auburn, Michigan State, BC, Temple, Toledo, and possibly Northwestern or Wisconsin. I am trying to see if I can coordinate with Nebraska, Tennessee, Kentucky and Wisconsin to get there for camps too. I am also keeping all options open, I have a wish list of top five, but each week I am hearing from new or other schools so all opportunities are open. For example Missouri, FSU, Miami, and BC are all newer interests.