Thanks to a weekend sweep of No. 7 Nebraska on Friday night and Michigan at Rec Hall on Sunday, the Penn State Wrestling team earned the inaugural Big Ten regular season dual meet title. Unfortunately, thanks to a win over Nebraska Sunday, Minnesota earned a share of that title with Penn State. Both teams finished with identical 7-1 conference records. Penn State hammered Nebraska 31-6 and beat up Michigan with a similar 34-7 score. Penn State lost only 4 matches all weekend and owned a lopsided 49-13 advantage in takedowns. Penn State still has two duals left before the conference tournament in early March but both the Lions and the Gophers are done in conference.

For those of you that don't know, wrestling matches do not always start at 125. If both coaches agree on a weight (usually 125), the match starts at that weight. If they do not agree, the starting weight class is randomly drawn before the match. Friday was one such occasion and it couldn't have turned out worse for Nebraska. The weight drawn was 174 which meant that Ed Ruth would start the match and David Taylor would end the match. Facing Taylor as the hammer is not something you want if you want a chance at beating Penn State.

Regardless that's the luck of the draw and Ed Ruth started Penn State out with a pin. Quentin Wright followed that by beating No. 7 Josh Ihnen and Cameron Wade beat No. 9 Tucker Lane. Those were two of Nebraska’s top-ten ranked wrestlers and they really needed an upset from one of them if they had hopes of beating Penn State. It was not to be though, and Penn State would win 8 of the 10 bouts including a ride-out overtime victory by Dylan Alton over 7th-ranked James Green at 157.

David Taylor scored a major decision victory over No. 6 Robert Kokesh of NU but the match of note was a 2-1 victory by Matt Brown over James Nakashima at 197. Morgan McIntosh was held out of competition for precautionary reasons so Matt Brown (weighing in at 174) moved up 2 weight classes and filled in for McIntosh at 197. Despite giving up 23 pounds, the talented freshman gutted out a win by pressuring Nakashima in the 3rd period, getting two stall calls the second of which counted for a point in a 1-1 tie. Brown held on for the victory.

Starting at the traditional 125, Penn State fell behind 4-7 thanks to a major by top-ranked Kellen Russell over Bryan Pearsall and a regular decision by No. 16 Zac Stevens over Frank Martellotti. Despite losing twice this weekend, Frank wrestled better but seems to lack confidence yet. Both Bryan and Frank are in tough weight classes in the Big Ten so counting on them making it to nationals is a bit of a stretch.

After Pearsall, Penn State reeled off 7-straight victories including Frank Molinaro’s 6-1 victory over No. 7 Eric Grajales, Ed Ruth’s major decision over No. 8 Justin Zeerip, Cameron Wade’s pin of No 10 Ben Apland oat heavyweight, and David Taylor’s tech fall of No 14 Dan Yates. Again, though, the match of note was Matt Brown.

With the match out of reach at 197, Cael sent Brown out to wrestle up 2 weight classes again, except this time Matt didn't get an unranked wrestler; against Michigan Brown faced No. 15 Max Huntley. Again, Brown was the aggressor despite giving up all the weight, and again the match went late in the 3rd period with the score tied at 1. Unlike the Nebraska dual where Brown won on a stall point, Matt countered a Huntley shot with 30 seconds left and turned it into a bout winning takedown for a 3-1 victory. Frank Molinaro won the Ridge Riley award giving to the outstanding wrestler of the dual, and it was well deserved, but I think Brown should have won it for showing the heart to move up two weight classes and beat a ranked wrestler. Of course if I had to wrestle David Taylor and Ed Ruth every day in the mat room, I would probably want to take it out on anyone I could. It’s too bad there’s no room for Brown in the lineup because he obviously has the talent to go a long way. 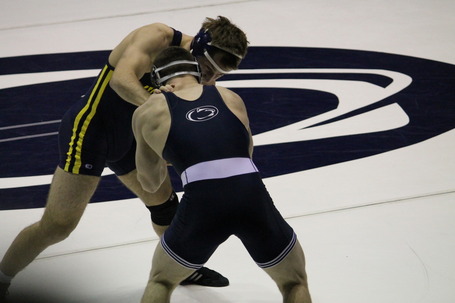 Really, you couldn't ask for a better weekend for Penn State wrestling. Pearsall and Martellotti both minimized damage and the rest of the guys held up their end. I usually don't like to play the "what if" game but I can't help but think, what if Penn State wrestled Minnesota now instead in early November? The Lions are peaking right now and the young guys have come a long way since November.

Regardless, Penn State sets a team record with 7 Big Ten victories including a win over Iowa so the conference wrestling season was a success. Penn State gets two tune-ups against Utah Valley and in-state rival Pitt before heading to West Lafayette for the Big Ten Championships.