BA is Chambers' biggest recruit according to the rankings thus far. He is also Penn State's most celebrated recruit since probably Pete Lisicky in the early 90s. He's a legitimate top 100 prospect from North Philadelphia. The talent-rich city of Philly has produced many elite prospects who have headed to the Big East (Syracuse, Villanova, Georgetown) or the ACC (UNC, Duke). Penn State has obviously been an after-thought for some time now but so has the rest of the Big Ten. No more.

BA is the 3rd Philadelphian Chambers has landed (DJ Newbill and Brandon Taylor were the first two). He likely won't be the last, if you saw the tease at the end of the Recruit Scoop's article. Obviously invading this hotbed of talent could really give PSU an advantage in the Big Ten. Chambers is really starting to cash in on his connections in the city.

Austin plays for Imhotep Charter, who is ranked #1 in Class AA and is the defending state champions. You might notice Sheldon Jeter's Beaver Falls squad is right behind them. Also, Austin plays for Team Philly on the AAU circuit, the same program as PSU's 2012 signee Brandon Taylor. He is also friends with 2013 commit Geno Thorpe and will undoubtedly help get the word out down there about what's being built here at PSU.

Austin is a slender 6'6" 180 pounds, but he has the handle and passing ability of an elite point guard. Not a true scorer, but capable of attacking the rim. Also, he's not a pure shooter, but has three-point range. He also has another year on the AAU circuit and another year of high school ball before he would arrive at PSU, so obviously there's room to grow.

As PSU's biggest commit in forever, the future seems very bright for Austin and Penn State. He is the second player to join the 2013 class with Top-150 guard Geno Thorpe. As of now, PSU only has one more scholarship available which could be used for either the 2012 or 2013 class. If more become available, however, with the momentum PSU has on the recruiting trail, they could possibly land the first ranked basketball recruiting class in history. 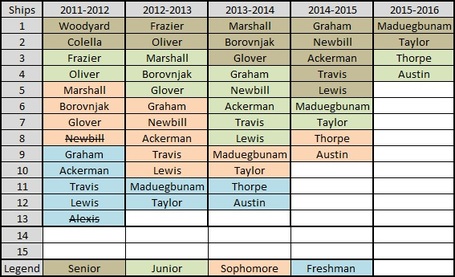 Welcome, Brandon, to the Penn State family! Be sure to check out Andrew Dzurita's and David Jones' stories on the commitment.