Penn State announced tonight that they have granted the release of sophomore guard Matt Glover. Brian Siegrist, the basketball SID, broke the news on twitter. The tweet claims Glover wants to transfer closer to his California home. He is an Orange County kid, who came to PSU via Sheridan Community College in Wyoming. He will have to sit out a year per NCAA rules, but he will have two years of eligibility remaining wherever he lands.

"Matt and I talked after the conclusion of the season and he expressed that he wasn’t comfortable so far from home and would like to move closer to his mother and his family," Penn State coach Patrick Chambers said in a Penn State release.

"I would like to thank my teammates, Coach Chambers and the coaching staff for the last year," Glover said in the school's press release.

"I enjoyed playing at Penn State. The decision to leave is not easy. I have a lot of family in California and it was hard to be this far away from them. I think it will be better for me if I can continue my career closer to home," he said.

In his first year with the program, Matt played in all 32 games this season and started in 21 of them. He played 58.8% of the available minutes this season, which was third on the team. He only scored 2.8 PPG by putting up some of the worst offensive efficiency numbers I've ever seen. A 72.4 ORtg is remarkably low for the minutes Glover logged, and he only took 9.8% of the shots while he was on the floor. So from an offensive standpoint, Glover's departure could very well be an addition by subtraction.

Before everyone shouts 'YAY, ANOTHER SCHOLARSHIP', you have to acknowledge his contributions elsewhere. The reason why Glover played so much clearly was his attitude and work ethic on the defensive side of the ball. These contributions are often overlooked, but Glover's hard play set a fantastic example for Chambers in his first season. He had 13 games of 5 or more rebounds and 7 games of 2 or more steals. Easily his best game in a PSU uniform was the Purdue shellacking where he got 11 rebounds, dished 5 assists, and grabbed 2 steals. Matt Painter said this after the game:

"If we could get somebody to play as hard as (guard) Matt Glover ... he clearly played harder than anybody that was attempting to guard him. He made a lot of hustle plays for them. That's something we've really prided our program in in terms of doing whatever it takes.

We wish Matt the best and thank him for his undying effort in such a crap season.

What this means for Penn State is yet another scholarship has opened up for Team #doworkPat. There will soon be a post about potential roster additions in the near future, but for now, enjoy the updated scholarship matrix. It answers how many scholarships PSU has available. 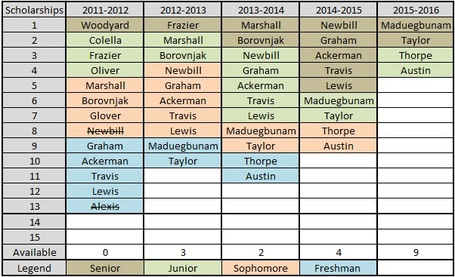