I don't think we're going to get a 'YAY ANOTHER SCHOLARSHIP' outta this one. One day after Matt Glover announced his transfer, Trey Lewis was also granted his release from Penn State. The promising freshman guard, who missed 12 games this year with a stress fracture in his back, will have 3 years of eligibility remaining wherever he goes. Chas Wolfe, a credible Ohio basketball scout, broke the news on twitter, and it's since been confirmed by the Collegian.

This is quite the shocker. Lewis committed to PSU under ED and his staff in August 2010, shortly after Trey Burke was officially off the board to Michigan. He seemed enthused with his decision, and showed nothing but positivity after Chambers was brought on board last summer. Everything seemed to indicate Trey was happy at Penn State, especially the close bonds he has with DJ Newbill and Akosa Maduegbunam.

EDIT: Here are the quotes from the press release. Much to my surprise, it sounds like the decision was initiated by Chambers as another carefrontation.

“Trey and I met after the conclusion of the season and the result of those conversations was that we both felt it would be best for him to continue his career at another program,” Penn State coach Patrick Chambers said. “Trey is a skilled player and a nice young man. We wish him the best as he moves forward with his career and we will assist him however we can in finding the right fit for him.”

“I would like to thank my teammates and coaches for the past season at Penn State,” Lewis said. “I had a great experience at Penn State and learned a lot with the opportunity to play in the Big Ten as freshman. After thinking about my future, I think it is best for me to move on and continue my career at a program that may be a better fit for me.”

At the end of the non-conference season this year, Lewis seemed to find himself in the doghouse with Chambers. His playing time decreased in favor of Nick Colella, and then he got hurt. As Nate Bauer of BWI suggests, perhaps this was more expected than any of us knew before. Bauer writes:

<>A source explained to BWI that neither player was a casualty of the "carefrontations" that Chambers talked about upon taking the job last June.
Though, the reality is that due to some behind closed gym doors issues that arose with Lewis through the season, the departure is not considered as particularly jarring to the program or Chambers. Lewis had some noted issues buying into Chambers' all-out attitude system to go along with his lower back problems that held him out through much of the Big Ten season.

The staff will be facing their biggest recruiting challenge yet this upcoming spring, but perhaps they might be prepared for it. DeChellis didn't have much of a success rate on spring signings, but Chambers has already proved superiority on the recruiting trail. Sheldon Jeter is the obvious immediate option, but a lot of roster turnover will unfold in the next month. More coaches will be fired, more players will transfer or declare for the NBA, and more recruits will get a release from their LOIs. There will be options for the staff, but there will also be more competition for these players. April can be very hectic as every school tries to make last-minute changes to their roster for next year.

Here's the (now scary) updated scholarship matrix. Only 9 scholarship players, in which three of them play the '5'. PSU needs some guards. 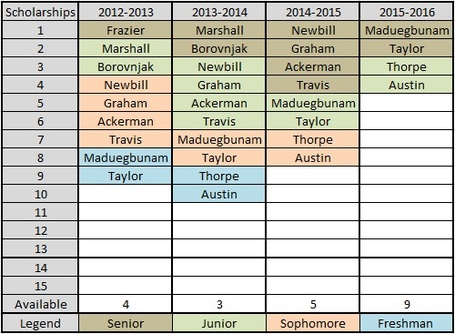