The Penn State Nittany Lion wrestling team heads to West Lafayette Saturday to defend their Big Ten conference crown at the 2012 Big Ten Championships held at Purdue University. The two-day event begins Saturday March 3rd at 10 a.m. and concludes with the finals on Sunday afternoon at 3 p.m. The tournament pre-seeds were announced Monday and all 10 of Penn State’s wrestlers were seeded 8th or better. If all of the Nittany Lions finish where they are pre-seeded they will qualify 8 of their 10 wrestlers for nationals. As always, BSD has you covered; weight by weight breakdown after the jump.

UPDATE: Thanks to psuwresfan, here's the official bracket.

Instead of going in order of weight, I'll break the tournament down in the order of wrestlers that give Penn State the best chance for an individual championship. Remember, the goal here is to qualify for nationals, sure every wrestler in the tournament wants to be a Big Ten Champ but they all want to be a national champ a whole lot more. In wrestling you can screw up in the conference tournament and still reach the ultimate goal of a national championship, you just have to make it to nationals first.

*AQ= automatic qualifiers – the number of wrestlers that will get automatic bids to the nationals. Wildcards are voted on after the finals. 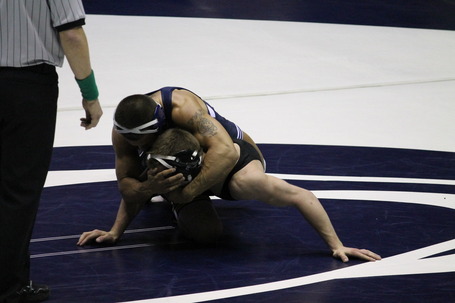 Two pics off Frank the Tank ripping a guys face off??!? Yes. It's that important.

I lump these guys together as 1A, 1B, and 1C because all three are virtual locks to win a title. That may be saying a lot, but these three wrestlers have just separated themselves from the Big Ten pack. Since all three wrestlers are undefeated, I’ve included their closest margin of victory over a Big Ten foe. Frank has a 5 point victory over Michigans’s Eric Grajales in the final Big Ten dual meet for Penn State and Taylor has a 5 point victory over Mike Evans of Iowa. Frank makes his hay from the top position and doesn’t score a ton of points like the other two, so he has the best chance at being upset, but that chance is very slim. If a wrestler were able to take Frank down at the end of a period, ride him out and choose neutral when it was his choice, I could see someone upsetting Frank, but that’s an unlikely scenario. The other two: forgetaboutit! Besides the aforementioned Evans match, Taylor has not had another Big Ten opponent keep it under a major decision and David has 2 falls and 4 tech falls in the Big Ten. By the way, four of those wrestlers were ranked at the time. 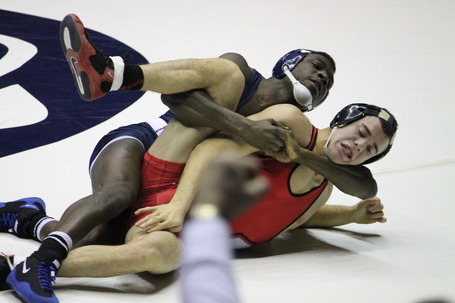 While looking up Ed Ruth’s numbers two things jumped out at me: 1) the dude is pure destruction, he’s only had three Big Ten matches go the distance and 2) Matt Brown really needs to see the mat next season. I named the Lofthouse match as Ruth’s closest, but technically the closest match he’s had was against his own teammate Matt Brown who kept it within 3 points in the Southern Scuffle. That should tell you all you need to know about Matt Brown and Ed Ruth. Ruth is on a mission, I would be shocked if he doesn’t win and get lots of bonus for Penn State. 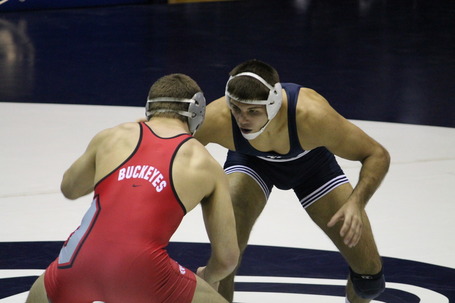 Quentin’s only Big Ten loss was to Steinhaus of Minnesota way back in November who happens to be the #1 seed. Wright and Steinhaus have seen each other a lot and are in a collision course for the finals. Q beat Steinhaus last year in the finals by a 4-3 score to take the 184 pound championship. Quentin is another Lion that could score serious bonus, he’s pinned 5 of the Big Ten wrestlers he’s faced. I would say it’s a 50/50 chance that Q wins the championship, but I’m not doubting him, he really seems to turn it on come tournament time. 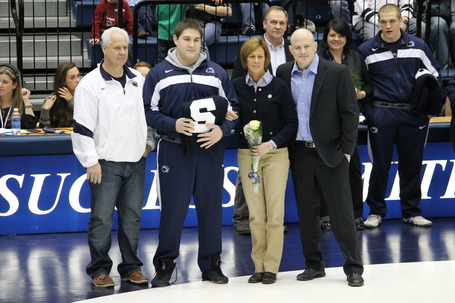 Cameron Wade has one last shot

Cameron Wade’s only Big Ten loss came to #1 seed Tony Nelson of Minnesota by a 5-0 shutout. But that was a long time ago and Cam has really turned it on at the end of the season. Wade has won 10 matches in a row including 5 against ranked wrestlers including 4 falls (3 in a row to end the season). Last season Wade took 5th at the Big Ten’s including a 0-3 loss to Nelson. Wade has finished 6th, 5th, and 5th in the Big Ten championships as a Nittany Lion, it’s time for Cam to make a splash in his final season. 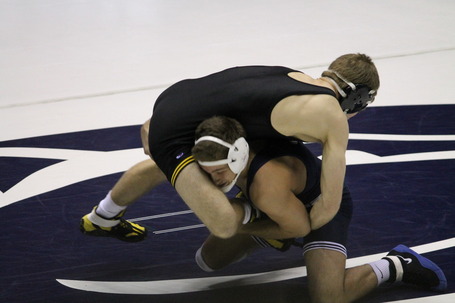 Dylan Alton hasn’t won big lately, but he’s at least won and that gets him a #2 seed for the redshirt freshman’s inaugural Big Ten Championship. Alton lost to top-seeded Welch by the slimmest of margins (1-2), but his other Big Ten loss was to Jake Deitchler of Minnesota who won’t be wrestling for the Gophers. It won't be easy for Alton, but the further Dylan gets the better Penn State’s chances are of beating Minnesota for the Championship. Minnesota has three top seeds at 184, 197, and Heavyweight, Zilverberg at 157 is Minnesota’s only unseeded wrestler. Alton could rack up some points with the Golden Gophers wrestler watching on the bench. 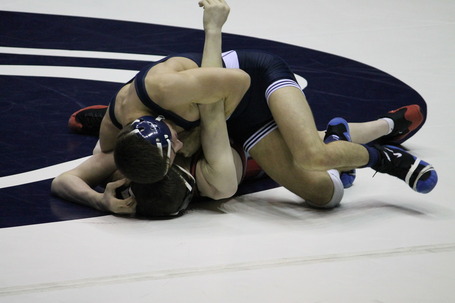 Nico was a bit of a surprise seed at 3 but when you look at the previous results, it’s really not. Megatron (which is a hilarious nickname considering he’s a lightweight… am I right?!?! *crickets*), lost to three Big Ten wrestlers this past season but one was by disqualification by illegal move on Sparty’s Eric Olanowski. Nico was winning handily at the time of the call and would have won that match. So the two guys that Megaludis lost to (Matt McDonough of Iowa and Zach Sanders of Minnesota) are seeded ahead of him. Megatron has been getting better and better as the season wears on but he’s just not in the same department of Sanders and McDonough. If Nico can take a 3rd place finish it would give Penn State a nice boost. 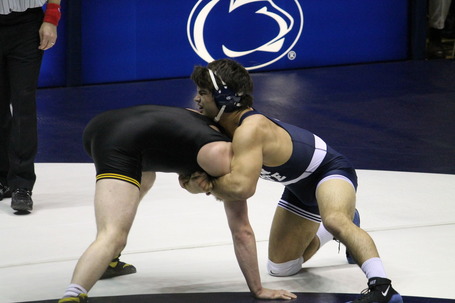 Morgan is the wild card for Penn State, like Dylan Alton, the better McIntosh does the better Penn State will do. Morgan actually has three losses to Big Ten opponents, but one of those loses was to Minnesota backup Scott Schiller in the Southern Scuffle. While that doesn’t look good for Morgan it doesn’t count against him in the seeding and he gets a healthy 3rd seed. The two wrestlers seeded ahead of him beat Morgan by an identical 3-4 score during the dual meet season. If Morgan can open up his offence, and if he’s healthy, maybe he can pull off an upset, he has the tools to do it.

That leaves us with Bryan Pearsall and Frank Martellotti. Frank is an enigma wrapped in a question, no one outside the mat room understands what’s going on with him. After an 18-3 season last year, Martellotti has tailspinned to a 6-7 record overall. He does have 3 wins against Big Ten foe and a close 3-4 loss to Ridge Kiley of Nebraska, but I’m not holding my breath. I know a lot of people say the tournament season is a new season for wrestlers, and that was true for Quentin Wrights remarkable run last year but I just don’t see it happening. He looks like he’s ready from his picture though.

Out of the two Pearsall could actually do some damage if he can get a good draw. Bryan is a pretty decent wrestler from the top position which helped him pin Michigan State’s Brian Gibbs in the dual this season. If Pearsall can get a repeat for Penn State the bonus would be nice.

Reasonable Expectations: any points these guys get are bonus points for the Lions

Penn State, Minnesota, and Iowa will be the favorites to win the Big Ten’s, probably in that order. If Penn State is going to repeat they will need everyone to finish at least where they are seeded. 157 and 197 will be huge for Penn State, if Alton and McIntosh get far in the tournament it will help Penn State’s chances immensely. For Minnesota, they will have two champs in Yohn at 197, and Nelson at Heavyweight with a tossup at 184 between Steinhaus and Wright. Penn State will have three champs as stated above, if Wright can win it will be tough to beat Penn State. Last year came down to bonus points as Penn State won by 1 measly point over Iowa. I don’t expect much difference this season.

As always, stop by BSD for continuing coverage, I'll have a Open Thread starting at 9:30 AM for the opening round. I'll try and keep you guys up to date as the day unfolds, so come on back if you don't have coverage.

For those of you lucky enough here's the press release from the Big Ten mothership:

The Big Ten Network will offer its most extensive Big Ten Wrestling Championships coverage ever, with all four sessions Saturday and Sunday, March 3 and 4, at Purdue University receiving either live television or online coverage.

As part of the Big Ten Digital Network’s subscription package and for the first time, BTN will provide live, whip-around Student U streaming coverage of the Big Ten wrestling preliminaries, beginning at 10 AM ET Saturday. Streaming coverage of select matches in sessions two and three will continue at 5 PM ET Saturday and at 1 PM ET Sunday, respectively.

On Sunday, session four of the Big Ten Wrestling Championships will be carried live at 3 PM ET on BTN. The network’s Tim Johnson, Jim Gibbons and Shane Sparks will call the action from Mackey Arena.