Success With Hyperlinking Kickstarts Your Heart

Share All sharing options for: Success With Hyperlinking Kickstarts Your Heart

By The People. It's news to me as well, but apparently Maple Street Press has ceased operations. You'll recall that many of your current and former Black Shoe Diaries writers contributed to "We Are Penn State", a lengthy pre-season magazine that was distributed online and in your local stores. It would seem that this isn't happening again. However, Brian at MGoBlog has taken matters into his own hands and is going the indie route via Kickstarter. And I mention this not because you're going to buy a magazine about Michigan football, but because I really want this shirt of the Brian Cook photobomb incident: 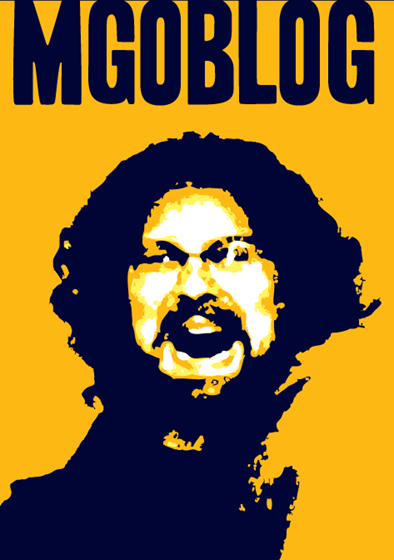 No, we're not going to put together a magazine on our own. Sorry. But, good on Brian and crew for going it alone. Blogs! Often legitimate! Elsewhere in MGoBloggery, a quick reference and comparison of Michigan's quickly-assembled recruiting class to Penn State's practice of accumulating early signings a few years back. Also PSU relevant in that link for 5% of BSD readers who are female and x% of male readers who may also be intrigued, um, Beefcake Jed Hill.

Keep in mind, this was before the implementation of STEP, which was supposedly needed to keep the athletic department from sinking into a penniless pit of despair and endless cash-grab road games at places like Coastal Carolina and New Hampshire.

If these numbers are accurate -- and that's always a shaky proposition when it comes to these figures -- only Alabama ($31,684,872) had a more profitable athletic department than Penn State.

Hey, Sandusky Update! Penn State, after some uncertainty on the issue, has agreed to pay the legal bills of its subpoenaed employees. Jerry Sandusky's legal team will have access to the juvenile records and psychology reports of his alleged victims. And here's a rather troubling look into the events that may have led to former district attorney Ray Gricar deciding to not press charges against Sandusky in 1998:

The day after Victim 6 came home from a tour of the football building with then-defensive coordinator and charity founder Jerry Sandusky and told his mom Sandusky had showered with him and a friend, the mother called police. She also called a psychologist.

Despite that, Gricar may have relied upon another psychological evaluation completed by John Seasock, and as Sara Ganim reports:

A source who reviewed the documents and has knowledge of the case said he believed Seasock’s report was the reason the investigation was closed."

But there is no explanation of why Seasock was brought in, or any indication if he interviewed Victim 6 himself or just reviewed the notes of the first psychologist, the source said.

"One could speculate there was an effort to find someone who could contradict the first one," the source said.

Many, many layers to the onion, my friends. And as shown by the athletic department's financial numbers above, nevermind the University's General Fund, there was a lot at stake for those involved with the investigation. And if the words and actions of the Board of Trustees haven't been to your satisfaction, you'll undoubtedly be shocked by this story regarding the lack of assistance and services promised to Sandusky's alleged victims by Penn State:

"I have been puzzled by statements from (the board) stating that they have been offering services to the victims," said Ben Andreozzi, the Harrisburg-based attorney for Victim 4, who says he was abused over several years by Sandusky, 68, in the 1990s. Sandusky, charged with 50-plus counts of abusing boys, says he's innocent.

Andreozzi, who has said he was also in contact with other victims and their attorneys, said none of the original eight were contacted.

"(Penn State) has probably paid out a million dollars at this point -- in donations, to lawyers, and PR -- and not a penny offered to the eight original victims," Andreozzi said.

When contacted today, a spokesperson for the university who is working with attorney Lanny Davis said, "Yes, we are actually in the process of announcing something shortly."

When asked to clarify, a reporter was told the information would come out today.

So, we'll see about that. In the BOT's minds, helping the victims is almost certainly equivalent to admitting liability.