With the Icers season over, and the end of March upon us, that can only mean one thing - IcersGuy has once again jumped into gymnastics-mode. In this first part of my (2nd annual) women's gymnastics team update, I'll review the scoring rules of women's gymnastics at the collegiate level, and then give some background on the major role players on this year's team.

How Women's Collegiate Gymnastics Works: Yes, I needed all of those clarifying details in there because it is one of the last major circles in gymnastics still using the old scoring model. In any case, the women compete in four events: Vault (V), Uneven Bars (UB), Balance Beam (BB), and Floor Exercise (FX). If someone competes on all 4 events, they are considered all-around (AA) competitors. On each event, a team will designate six competitors to complete an exercise. The top five scores from those six are added up for the team score on that event, and the four event scores are totaled to make the final team score to determine the winners and placement of the teams.

As for the actual scoring, scoring at the collegiate level for the ladies is still done on the 10.0 scale, and move in 0.05 increments (10.0, 9.950, 9.90, 9.850 and so on). Judges score the events based on difficulty of the routine and how clean the routine is completed. The two judges scores are averaged together for the final score. (In the case of 4 judges, the high and low scores are thrown out, and the middle two are used for scoring.) Like the good ol' days, a 10.0 is a perfect score, not to mention rare to come by. Anything above 9.90 is amazing; 9.80-9.875 is very solid; 9.70-9.775 is good; and anything below that is less than stellar. This also helps explain why most final scores are close - the difference between good and elite is about two-tenths of a point. The goal for each event score is 49.000, making 196.000 the benchmark for an entire meet. If you're above 196.000, you'll be in the running for sure.

With that as the basis, lets take a look at this year's team. 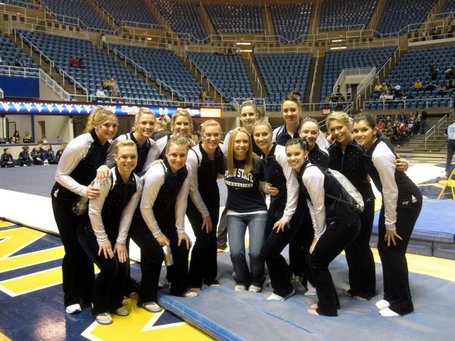 Picture from the PSU Women's Gymnastics Facebook page. Tons of great pictures
as well as updates during the meets, so be sure to follow!

Sharaya Musser - Won a record 6 Big Ten Gymnast of the Week awards this season, making it 11 in her career. Named to the 1st Team Big Ten team. Ranked 2nd in the nation in the all-around. That really should say enough about the quality of gymnast that is Sharaya Musser. She continues to do great work on all four events, hitting high scores and doing it consistently. She's only a junior, so she still has another full season to wow the fans in State College.

Maddie Merriam - A fellow junior, Maddie continues to put up solid results in her own right. She averages over a 39.000 score on the all-around at each meet, which puts her in the top 25 in the nation. Her biggest weakness is on the balance beam - one of the better events for the Penn State as a team. A solid 2nd all-around competitor who, like Sharaya, has another full season to shine.

Whitney Bencsko - One of four seniors on the team, Whitney has overcome injuries early in her collegiate career to finally show what she can bring to the table. When she's on her game, she can hit scores in line with Maddie, making Whitney a quality 3rd all-around competitor for the team. What she lacks on the vault and uneven bars, she makes up wonderfully on beam and floor - where Whitney has shown she can earn 9.900 scores. Her senior leadership helps keep the team on top of their game.

Krystal Welsh - It's rare to have four all-around competitors on a team, let alone four who can score above 39.000 on a regular basis. What makes Krystal's addition to this group more surprising is that she is a freshman who has been competing on the all-around since the start of the season. Krystal usually goes early on the events, and her consistency of quality scores allows her teammates to go all-out on their own routines. And as a freshman, she has tons of room to grow from here.

Kassidy Stauder - A sophomore, Kassidy started the season on the all-around, but has since been reeled into a couple events per meet. While she is good at all 4 events, she has given Penn State quality scores on beam, and provides a much needed boost on bars. Her success on those events will be integral to Penn State's success this season.

Daryl Konsevick - The second senior on the team, Daryl has competed only on the floor and beam for the team this season, but she does them both extremely well. Like Whitney, her senior leadership gives the rest of the team something to look to. And her scores help too, as she scores high and scores consistently on both events. A true leader in every sense of the word.

Lexi Carroll - Another freshman, Lexi sees action mostly on vault, with the occasional floor routine. In both cases, Lexi has scored well enough to benefit the team, whether in the final score or being that quality opening score to help the rest of the team relax. Like Krystal, she'll only continue to improve in the coming years.