In yesterday's post, I went over the scoring system, as well as the main "names to know" for this year's team. Looking ahead, the ladies have two tournaments left - Big Ten's and the NCAA's. I'll review each of those first, before discussing the rest of the team in the second half of this post.

The first session will include Michigan, Illinois, Iowa, and Michigan State. Michigan and Illinois can put up decent scores, but I doubt they'll make a run for the championship. The evening session will include Nebraska, Penn State, Ohio State, and Minnesota. Nebraska is the cream of the crop here, as their season average is higher than most of these team's season-high scores. (Ohio State is the exception, but they won't be getting the home-judge advantage in IC.) Penn State will need to perform to their best on all four events and hope Nebraska has an off meet, while hoping OSU and Minny don't do the same. Figure Nebraska will win their first Big Ten title, while Penn State takes their fair share of individual awards (read: Sharaya Musser Wins All The Awards!!).

The NCAA tournament ends up being a series of 6-team meets that ultimately whittles down to the Super Six. First, 36 teams are put into 6 regional tournaments using a snake order for placement. As a quick example, the #1 ranked team will be in a regional with the #12, #13, #24, #25, and #36 ranked teams. The top two teams from each of those 6 regionals will go to the "semis" of the NCAA's. Those teams are then placed into two sessions, once again snaked by their season rankings. The top 3 teams from each of those meets, known as the "Super Six", compete in one final meet - the team with the highest score at that final meet is the NCAA Champion.

Penn State is currently ranked 12th, so the biggest hurdle will be just getting past the regionals and to the championships themselves. Based on the current rankings, PSU would be in a regional with #1 Florida and #13 Ohio State. So it's fair to look at the Big Ten Championships as a quality preview of what the NCAA regional meet could look like. On a good night, this team can definitely outscore Ohio State; on a perfect night, they could make a serious run at the "Super Six".

Now, a look at the rest of the team 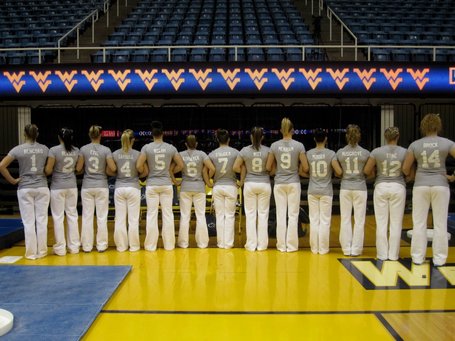 Picture from the PSU Women's Gymnastics Facebook page. Tons of great pictures
as well as updates during the meets, so be sure to follow!

Alexandra Stein - The 3rd senior, Alex has mostly played the roll of the bars specialist for the team. She's provided quality scores each meet on an event that Penn State has struggled with for much of the season. A solid gymnast to help round out the team on bars.

Lindsay Musgrove - Lindsay sees most of her action when it feels as though some of the other gymnasts are struggling. In her limited action, Lindsay has scored well on vault, and decently on her one beam and one floor routines. A sophomore, she's a great asset to be able to plug into the line-up on an as-needed basis.

Alex Witt - The third freshman on the team, Alex is a spot-starter on vault. She's done well when called upon, which can be difficult when you're not seeing regular action and you get one chance to prove your worth at the meet. Hopefully, she'll continue to grow and improve, becoming an important part of the team going forward.

Kristin Blades - After a solid freshman year, Kristin has been dealing with some injuries this season. She has started to do vault exhibitions (completing vaults during a meet that does not go towards the team's 6 official scores), so it's fair to extrapolate that the coaches still see her as an important part of the team in the coming years.

Stephanie Brock - Another sophomore with an injury that has slowed her Penn State career, Stephanie has the ability to be an all-around competitor. This allows her to either continue to working on all events, or decide to become a specialist and work intensely on one. Both are important to a team's success, and we hope for a complete return for Stephanie next season.

Natalie Ettl - The final senior and perhaps the most emotional story of the season, Natalie was forced to retire from gymnastics prior to the season. An elite bars specialist (and two-time Big Ten Champion on bars), Natalie was unable to recover from her seventh right knee surgery, forcing her into the role of coach/spectator. Still, this co-captain has been a continued leader for the team. A John W. Oswalt award winner, we wish Natalie all the best in her post-graduation pursuits.

At the end of the day, this is a very good Penn State gymnastics team that can score high on all four events. The only downside right now is that they have yet to put together high scores on all four events at the same meet. Their season high scores on each event is on par with the top teams in the nation. Their vault and floor scores have been solid and continually improving throughout the season; their beam scores started slow, but have been much better as of late; their beam scores are just the opposite, starting strong, but struggling as of late. If they can put it all together, this team can hang with the top teams. Here's to hoping they've saved their best for last this season.