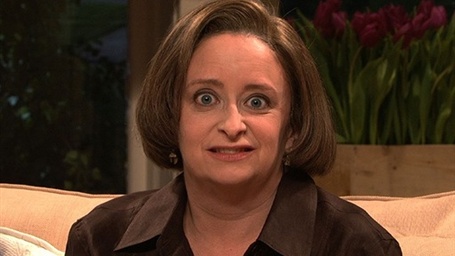 I never watched much of the Patriots, but it took just the first spring practice for me to see that BOB’s offense will be different than we’re used to seeing from PSU. In one of the videos (thanks for the access, BOB) the QB identifies the ‘mike’ and the C is making line calls, setting the blocking.

I saw angels and heard trumpets. The clouds parted, the sun shone, even the damn birds were singing. It was a hallelujah moment for me. BOB appears to be giving our boys some flexibility and responsibility at the line of scrimmage.

How will they handle it? Will McMoxie be allowed to check out of the play and sling it deep? Maybe it will help us to take a deeper look at what they’re coming from to guess what how they’ll handle the adjustment.

Now BOB didn’t watch last year’s offensive film because it’d be difficult/unfair to make judgments without knowing the scheme(s), or what the players were taught (though, that didn’t stop him from watching the defense – but I digress..). Will that stop me? Hell no. I’m too dumb to withhold judgment just because I don’t know schemes. Stupidity has never stopped me before. What better medium than the interwebs to prove it?

Let’s take a formation that BOB will likely use, against an opponent he’ll face next year. This is ‘11’ personnel (1 RB, 1 TE), shotgun, against Temple last year. In our first look, it’s 3rd and 9 from our 34 yard line, during the first drive of the game. Our boys reached this point by a Sczerba false start, and Redd run, and a FB dive. Temple shows nickel, with 3 down linemen and 3 backers.

They gave us fans an end zone view for once, if you can believe it. This shot (below) is at the snap. C Stank has a 300lb man 4 inches from his nose; G Pannell has a backer heads up; and T Okoli has a DE on his outside shoulder. Another backer is stacked behind the DE. Off screen to the right, WR Kersey had a corner in his face, but that corner has started to sneak down the line of scrimmage. And I’m sure you notice the two safeties rotating to their left (our right). I don’t have to tell you what’s coming.

OMG IT’S A BLITZ! Tricky Owls are tricky. (Mul-tuh-plee aggressive, bitches). Counting the blitzing corner, they had 5 defenders on our right side, but they’re only sending 3 – though, it isn’t the 3 you’d expect. They’re trying to create confusion. With TE Sczerba releasing, we only have three blockers, and OT Okoli wouldn’t normally have any reason to look up the corner. But as the still below shows, our boys slide right. Yes! RT Okoli picks up the corner; RG Pannell gets the DE, C Stank gets the LB, and G Troutman hits the NT, though that nose is kinda/sorta dropping to the center of the field. But how about that for execution! 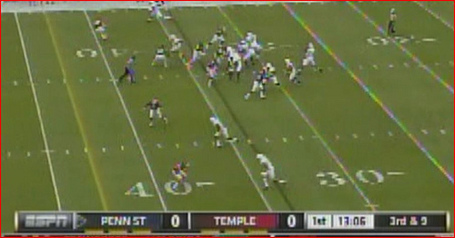 RB Redd’s responsibility doesn’t come, so he releases into a pattern. Unfortunately, Bolden has finished his drop and he doesn’t have any wide open receivers. In fact, only 2 of the 5 targets are even turned and looking at him. That's a nice pocket though, huh? 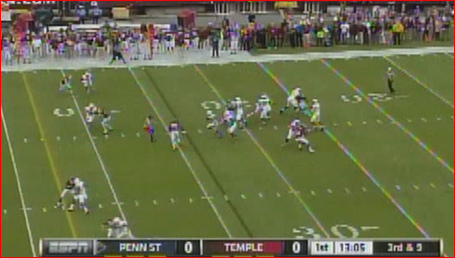 Does that matter to QB#1, Rob Bolden? Of course not! He anticipates slot WR Brown on an In route, and delivers the ball on time with accuracy for a 16 yard gain. First down! 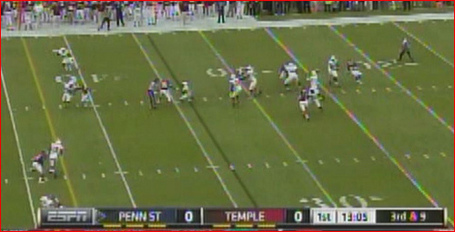 Wow – great protection, thrown with anticipation. How did we pick up the blitz like that? How did the O line know to slide to the right?

I could be wrong of course, but I don’t think they knew to slide to the right. Nope – I think the protection was part of the formation, called in the huddle. Why? Because check out this play in the 2nd quarter.

It’s 3rd and 8. Same formation, but we’ve flipped the RB (Beachum) and TE. Temple isn’t playing around, showing 7 potential blitzers at the snap, 4 of them to our O’s right side. Will the O line slide right again? Will the line man it up, with RT Okoli taking #6, and RB Beachum assigned to #7? 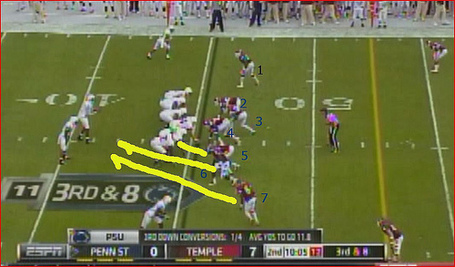 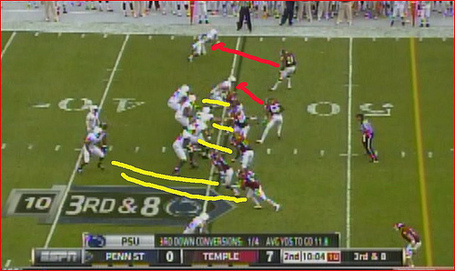 Those tricky Temple Owls don’t even bring 5, though. It’s actually just a 4-man rush, as before, with one of the down lineman dropping into a presumed ‘hot’ zone, as before. But this time our slide leaves us with 4 blocking 2, and Beachum taking the other 2 rushers. 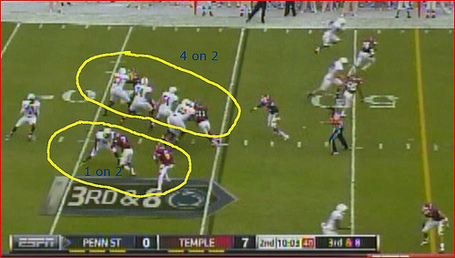 But wait, there’s more. The NT is triple-teamed, though Okoli (circled in blue below) turns to see the guy who is about to light up Bolden. Bolden is ready to throw, but he now has 4 receivers being covered by 7 defenders. And best of all, as evidenced by the yellow first down marker and the line of blue question marks, not one receiver is ‘hot’. Bolden stands tall like a man, and gets whacked as he throws. Pass incomplete, punt into the end zone. 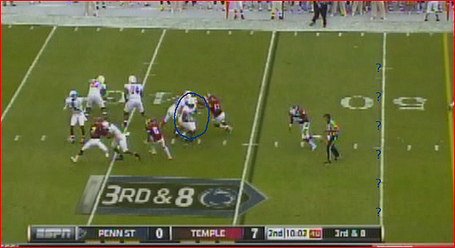 Just to make sure I wasn’t imagining things, I checked the rest of the game for the same formation. We ran it 3 more times, all in the second half. On 3 and 18 in the 3rd quarter we repeated the slide to the TE side, despite numbers on the back’s side. And punt again (which was blocked). In the 4th quarter we ran it twice more, but didn’t slide either time. Played it straight up man. Beachum even got to release on one of those because his assignment didn’t blitz (tip of the hat to Beachum who did a nice job in pass pro the whole game).

What’s it all mean? Hell if I know. Like I said at the start of this note, I don’t know the schemes or how they’re taught. But I refuse to let that lack of insight stop me from making outrageous declarations, and proclaim them as indisputable facts that cover not just this game, but apply equally to the last five hundred years of PSU snaps on offense.

As noted above, I’m guessing that the slide was part of the formation. When Temple blitzed into it in the first quarter, hooray success. When they blitzed away from it in the second and third quarters, boo failure. And we get the same deal with our routes. There’s not a receiver on the planet that didn’t see the overload in the second example – yet Bolden didn’t have a target in the frame at the top of his drop. Temple was mul-tuh-plee aggressive all game, blitzing, slanting, and stunting all over the damn place. That's a lot of opportunities to burn them. But we only got them once, when they aggressed themselves right out of the play on Silas’ touchdown run before the half.

BOB is bringing a new playbook, with new terminology, new schemes, and probably, a new set of reads and responsibilities at the line, to players that (probably) aren’t used to any of them. And unlike the NFL, BOB gets less than half the time to implement it. He gets 15 practices this spring and – what, 6 weeks? – this summer to teach it. Throw in the facts that BOB doesn’t appear to have Blackledge/Collins on the roster, and he has just 1 RB at spring practice that played RB in a game last year (though he does have 17 O linemen)…..that’s a lot of things to overcome. It could get ugly for BOB. Actually, I’m expecting this offense to be as bad as last year – and worse would be completely justified

I’m still excited, though. If the 2012 offense blows donkeys, I’m looking at it as an investment. What do you say?

Is the offense better next year, or not?