Why Commit Early? An Argument For Making An Early Life Decision

Share All sharing options for: Why Commit Early? An Argument For Making An Early Life Decision

In Part One of a new Point/Counterpoint series, Jared Slanina takes a look at one of the biggest debates surrounding college football recruiting, the early commitment. Look for Part Two later this week. 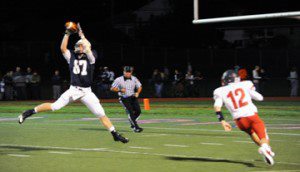 As most of you already know, highly touted tight end Adam Breneman is set to announce his commitment on Friday. Breneman is ranked as the top tight end prospect in the nation and practically has his pick to attend any school of his choosing. The 6-5, 225 pound Cedar Cliff product holds offers from Alabama, Florida State, Stanford, Ohio State, Wisconsin and just about any other college football power you can imagine. With so much opportunity and such an important decision to make, why would someone of Breneman's stature commit to a school eleven months before Signing Day? The reasons may be more obvious than you think.

Thanks to modern technology, college coaches have numerous outlets to reach out to recruits. Constant correspondence via Facebook, Twitter, email, and texting combined with mailboxes stuffed with letters and a phone that almost never stops ringing can be daunting for any high school student who is also trying to balance schoolwork, athletics, and all the never-ending drama that comes with being a 17-year-old. While some coaches may never stop hounding a target, an early commitment certainly turns down the noise and allows for the opportunity to completely tune out recruiting pitches.

This also helps the player turn into a recruiter for his future team. To get a feel for the importance of a recruit becoming the recruiter, look no further than the impact of Justin King with the 2005 class. King helped reel in Derrick Williams, the highest rated recruit in the nation, as well as other major recruits even though Penn State had fallen on hard times. In addition to making sure he is part of a talented class that will make an impact, it also helps develop friendships before they step foot on campus. A high school teammate of mine was ranked as the sixth-best offensive lineman in the nation (a five-star before the star system). While he was narrowing his list, he would receive regular phone calls from Justin Zwick, an early Ohio State commit who was one of the top quarterback prospects in the nation (despite the high ranking, Zwick would eventually be beaten out by Troy Smith). Zwick would call my teammate and tell him that he would need his help to be successful at Ohio State. The two became close and eventually entered in the same class at Ohio State.

An early commitment also allows for the opportunity to plan ahead for early enrollment. Even if a recruit decides to finish out their senior year, they can at least get an early start with a college-level strength and conditioning program. Another high school teammate of mine made an early commitment to play tight end for Bucknell, and within months he was able to bulk up and improve his strength tremendously by following a workout plan given to him by his future school.

Perhaps the biggest factor is the ability to focus on your senior season of high school football. Many top recruits vie for a state championship and embrace the opportunity to help carry their team toward this lofty achievement. The ability to focus solely on working with your teammates during your last season together cannot be overstated enough. Playing alongside the same group of guys for a number of years forms a bond like no other. You literally shed blood, sweat, and tears together as you try to figure out what kind of person you are going to be. Your teammates are there to celebrate all your achievements, and also there to pick you up after you get benched or get rejected by that cheerleader you had your eye on. You go through every emotion imaginable together and build a level of trust that is hard to match. I played with about 125 guys collectively from grades 6 though 12, and only seven of us played together through our senior season. It's been ten years, but if any of those guys called in the middle of the night to ask for my help with anything, I would be out the door before you finish reading this sentence.

Recruits across the nation will face the decision to make an early commitment, wait until Signing Day for a dramatic announcement, and everything in between. Let's just hope one of the guys that is committing early gives us a reason to cheer come Friday.