It's the best time of the year. Championship Week is in full swing and has yet to disappoint. Soon enough, the Big Ten will be joining the party. In an attempt to catch BSD up to the happenings of Big Ten basketball, this post will be complete with standings, brackets, tempo-free aerials, and predictions.

There was a three-way tie for the regular season championship. Most thought Ohio State would runaway with the title, but the team that features 4 All-Big Ten performers lost 5 games in conference play (3 more than they did last year). I personally think that's more of a testament of how strong the league has been this year, but time will tell if the Buckeyes are overrated. They did just survive two incredible road games against Northwestern, who was playing for the tournament lives, and Michigan State, who was playing for an outright Big Ten championship.

Another surprise was Iowa with 8 wins (and a season sweep of Wisconsin) under 2nd year head coach Fran McCaffery. The Hawkeyes did only play Michigan, Michigan State, and Ohio State once, though. Indiana's turnaround was phenomenal but also expected, especially after their undefeated non-conference slate. Illinois could be considered a surprising disappointment, but I wasn't surprised their league win total. If you think I'm just being full of myself, I would like to point out I did win this.

Now who played the best in conference play by possession? Being the nerd I am, I actually recorded these stats myself, but you can see the numbers at Basketball Prospectus. 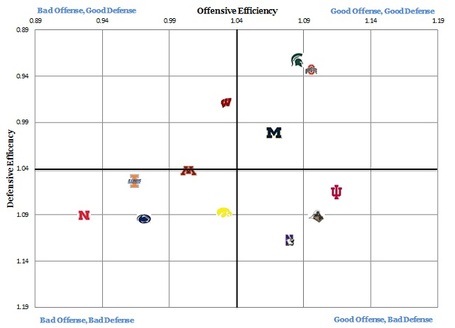 If you've never seen a tempo-free aerial before, you are a great team if you land in the top right corner and a bad one if you are in the bottom left. Efficiency is measured as points-per-possession, while offense is on the horizontal axis and defense is on the vertical. The average efficiency for this conference season was 1.04 PPP.

Michigan State and Ohio State separated themselves consistently throughout the year. Michigan and Wisconsin's decision to play defense paid off, while the rest of the league is practically separated by their offensive ability. Northwestern, Purdue, and Indiana have great offenses, but also are susceptible to getting burned on the other end of the floor, just like PSU and Nebraska.

As we head into the tournament, the Big Ten currently has six locks for the NCAA tournament. Northwestern is the only remaining team who has a realistic chance, but they need to win a game or two in Indianapolis to feel better about their chances. They are right on the bubble line if the season ended today. With Nebraska now in the conference, the tournament has a slightly new set up this year. Only the top 4 teams get byes, instead of the top 5 when there were eleven participants. 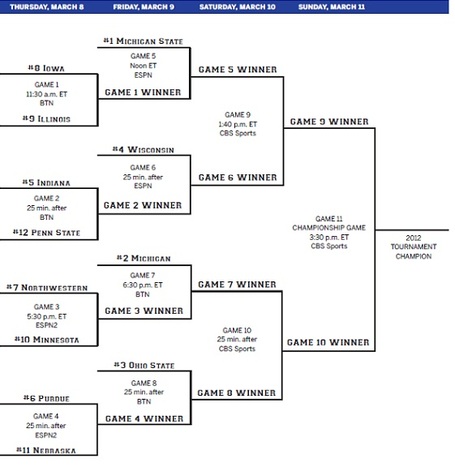 KenPom likes to run awesome log5 projections for all conference tournaments. He posted the Big Ten's yesterday. As expected, Penn State has just a 0.01% chance remaining to dance this season. As far as my predictions for the Big Ten tournament, I'm not that scientific. My subjective guesses are based on everything from KenPom's numbers to past Big Ten tournament history to personal bias and everything in between.

This is a pretty open tournament, but I do think Ohio State will win the whole thing for the third straight season. I've got Northwestern in the semis, but don't sleep on Minnesota. They've gone down in flames in February, but I do like their backcourt. Whoever wins that 7/10 game I think makes a mini-run. I also like the Branden Dawson-less Spartans to get bounced by Iowa. I will likely end up being completely wrong, but who cares. Happy March, everybody!