Success With Hyperlinking Is Doing The Right Thing

Share All sharing options for: Success With Hyperlinking Is Doing The Right Thing

It's About Time. In the aftermath of the Jerry Sandusky sex abuse scandal, Penn Staters were looking for answers. How could this happen in this sleepy town? On this idyllic campus? Under the supervision of people that we all knew? In January, those questions were replaced with one for new University President Rodney Erickson - "What are we doing to make sure this doesn't happen again?"

Now, we have at least a partial answer. Last week, Penn State announced a new training program designed for employees to recognize and report possible abuse:

Sue Cromwell, director of Workplace Learning and Performance in the Office of Human Resources, sits at the helm of Penn State’s new training program.

"Things were very hectic in the fall, and we had to really look at what was needed to build this team," Cromwell says. "We wanted to focus on the movement from awareness to action, and what that means for employees."

Cromwell says the training sets a clear chain of command for employees who see, or think they might see, sexual abuse on campus. Policies for handling an employee who doesn't follow the law are in the works.

"We looked at probably ten programs and institutions," Cromwell says. "We’re not going to reinvent the wheel. We’re looking at what works immediately with summer programs coming up, and then the long-term, sustainable training."

Starting Wednesday, summer camp leaders are getting trained to look for signs of abuse and get clear directions on how to report it. For example, counselors will be watching for campers who experience sudden changes in mood or seem withdrawn out of nowhere, though of course there can be many reasons behind extreme shifts in mood. If a counselor witnessed or was told about a sexual abuse violation, he or she would need to tell the program director. Any mandated reporter is required to not only inform the director, but university police, the university general counsel and the risk management department. The director is required to call Pennsylvania's ChildLine and provide a written statement to the Department of Public Welfare.

There's even a special training for the trainers, and online training to be used throughout the year. All employees will be encouraged to participate in the online program, which should be finished in time for the fall semester

The University's new policy also requires background checks for any employee or volunteer dealing with minors. The Penn State administration has taken necessary criticism since November for a variety of serious issues. It's time to recognize when they've done the right thing. Well done, everyone. Let's hope our university takes this opportunity to be a leader in child abuse prevention.

Lots of good things happen here! Penn State student Emily Passauer was awarded the Big Ten Network's LiveBIG $1000 scholarship for her leadership on the Student Trips Planning Team . . . Penn State's director of career services reports that employer recruitment is up across the board:

"Career Services has received questions regarding the effects of the recent difficult, troubling and challenging events at our University on employment recruitment activity," he said. "Penn State Career Services is recognized as among the leaders at national and international levels for quality-comprehensive services and strong on-campus recruitment programs. Now more than ever, employers will find Penn State students and graduates hold the professional qualities, academic knowledge and skills to excel in the workplace."

"We can confidently convey to students and parents the word that recruiters are every bit as interested in Penn State students as they ever were," Garis said.

#HireOurGrads . . . Researchers from Penn State and IBM have developed a Trojan application to highlight security flaws in Android . . . and I know there's been all sorts of construction on campus recently, but OH MY GOD have you seen this monstrously awesome new building? 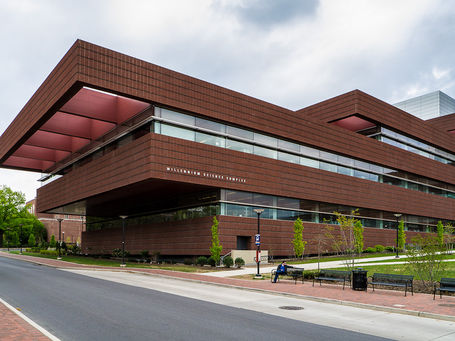 Now back to your regularly scheduled sports programming. Sort of. The Paterno Family apparently turned down overtures from the university to rename Beaver Stadium after the late Joe Paterno (h/t jesse.):

Penn State informally offered to rename Beaver Stadium after Joe Paterno, and the coach's family replied through back channels that it wasn't interested because it was never important to the late head coach, said a person familiar with the situation.

The issue arose while the two sides also were also discussing details of payments and benefits due to Paterno's estate and family under Paterno's contract, said the person who spoke to The Associated Press on condition of anonymity Monday because there was no authority to speak publicly on the topic.

This seems perfectly logical. Paterno had no interest in being thought of as "just a football coach." Renaming the stadium may have come with the best of intentions, but I'm quite certain Paterno is pleased that the building that bears his family's name is the library.

The Philadelphia Inquirer reports that the quarterback position remains unsettled. Senior cornerback Stephon Morris told the Pittsburgh Post-Gazette that, unlike his predecessor, new head coach Bill O'Brien didn't want to lead the team out on to the field. Like his predecessor, however, O'Brien takes pride in his players' academic success:

Sidelined for two seasons because of academic difficulties, which led him to consider transferring to a junior college last fall, Jones has emerged as one of the primary fresh-start stories of 2012.

During Saturday's Blue-White Game at Beaver Stadium, the redshirt sophomore offered a second glimpse of the promise he flashed two years ago: strong arm, good mobility, ability to extend plays. Further, Jones assured the most critical component of his future: He will be eligible to play.

"He has been a fun guy to coach," O'Brien said. "He made a lot of strides this spring, he's doing better in school, and I've really enjoyed being around Paul Jones."

ESPN and PennLive have their takes on the Blue-White Game here and here, respectively. In a shameless plug for our own content, Devon Edwards gave us his quick observations from the press box, Chris recapped everything, and some of the rest of us told you what to like about the offense in yesterday's roundtable.

Uh, sorry to all you people who carry the ball, but defense still rules here. While Penn State has struggled recently putting offensive players in the NFL, we always seem to have defensive lineman who can break you in half:

[E]very elite Division I program seems to have a specialty when it comes to churning out NFL players. And Penn State takes a back seat to no one when it comes to recruiting, coaching and developing linebackers and defensive linemen.

What you see in college, typically, is what you're going to get in the pros.

They are blue-chip stocks. And the NFL can't get enough of them.

That won't change next week during the draft when former PSU All-America defensive tackle Devon Still is expected to hear his name called in the first round or early in the second.

Offered without comment by the author (but expecting a world of snark in the comments). Rivals apparently thinks that the University of Miami (Fl.) is "the obvious choice for Linebacker U."

The group, which included university president Rodney Erickson and acting athletic director Dave Joyner, used shovels shaped like hockey sticks to dig into a sandbox about 100 feet away from the construction site.

Terry Pegula, an oil and gas executive who founded East Resources in Warrendale and also own the Buffalo Sabres, pledged $88 million to bring Division I hockey to his alma mater. He since has upped that commitment to $102 million to ensure Penn State hockey "has the resources to be a national leader."

"Let's all visualize Guy Gadowsky and (women's coach) Josh Brandwene handing off national championship trophies to their teams in the future," Pegula told the crowd of about 300, which included donors, members of the men's and women's hockey teams and former Nittany Lions quarterbacks coach Jay Paterno.

Pegula's donation is the largest private gift in university history.

"Penn State needs to be a hockey place," Joyner said. "We've been talking about it for many, many years, and until a great gift from the Pegulas, it was really a dream."

The arena is scheduled for completion by 2013, the same season that the Nittany Lions will begin play in the newly formed Big Ten Hockey Conference. Nice to see Jay Paterno make an appearance as well. "Loyal and true," indeed.

SOOIE NO! I know it's not technically Penn State related, but it is related to the Big Ten. The University of Arkansas replaced Bobby Petrino with John L. Smith. Yes, really. John L. Smith. The guy who gave us this:

Maybe he and Matt Rice can open a gallery. Aaron Maybin struggled early in his career with Buffalo Bills, but found a home with the New York Jets last season as a pass rushing specialist. This week, Maybin discussed his artistic talents in a segment on Jets Nation. Move to 1:04 for the most relevant Penn State comments.